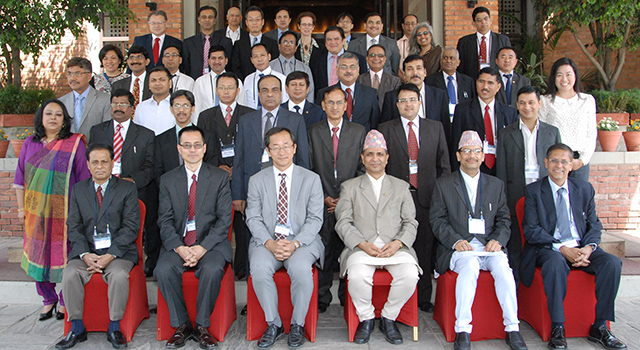 The Second Meeting of the SASEC Customs Subgroup (SCS-2) was held on 22–23 May 2014 in Kathmandu, Nepal. The concrete outcomes of the Meeting were

The Meeting broadly endorsed the projects and initiatives in the Work Plan 2014-2015, following endorsement by the SASEC countries last March 2014 of the SASEC Trade Facilitation Strategic Framework (TFSF) 2014-2018.

SASEC countries proposed projects and activities for inclusion in the Work Plan based on their respective ongoing customs reforms initiatives and in areas that could benefit more from a regional approach.

The Work Plan endorsed by the Subgroup consists of seven subregional projects and 20 national projects that would translate the strategic thrusts in the SASEC Trade Facilitation Strategic framework (TFSF) into concrete outputs and outcomes. The TFSF identifies customs modernization and harmonization as one of the five priority areas of the TFSF guided by the following strategic thrusts: (i) simplifying and expediting border formalities to facilitate movement of goods, vehicles and people; (ii) increasing application of ICT processing; and (iii) developing the National Single Window (NSW) system to link all border agencies with the trading community

The subregional projects in the Work Plan include:

Priority subregional capacity building activities identified by the SCS to support the Work Plan include Customs valuation and database; risk assessment; nomenclature for trusted trade program; national single window; international standards and conventions (including the Revised Kyoto Convention); and post clearance audit. These areas match the training needs identified by the SASEC countries and are also consistent with the training needs survey conducted by the World Customs Organizations (WCO). ADB and the WCO will collaborate with the SASEC countries in implementing the capacity building activities. India has also offered to share its expertise and experience in the areas of customs valuation and risk management under a South-South modality.

The Meeting brainstormed on a proposed study on electronic exchange of trade-related information. The project would enable the efficient exchange of trade data; better focus on enforcement and compliance issues, smooth movement of cargo, greater certainty and reduced clearance time and cost for compliant traders; and reconciliation of trade data. The SASEC countries agreed to pursue further the development of the concept paper to be considered at the next meeting of the SCS.

The Chief Guest, Mr. Yuba Raj Bhusal, Secretary of the Ministry of Finance of Nepal, opened the Meeting and delivered the keynote address. The heads of delegations of the SASEC member countries highlighted their respective Customs modernization programs and stressed the importance of enhanced cooperation in Customs. The Meeting was chaired by Mr. Surya Prasad Acharya, Director General, Department of Customs, Ministry of Finance, Nepal, assisted by Mr. Kenichi Yokoyama, Country Director of ADB’s Resident Mission in Nepal, and attended by representatives from the customs authorities of the SASEC countries, the Regional Office for Capacity Building for Asia and the Pacific of the World Customs Organization (WCO) and the Government of Japan. Representatives from Japan International Cooperation Agency and the South Asian Association for Regional Cooperation attended as observers.

A knowledge sharing event was held on 23 May following the Meeting of the Customs Subgroup to share expertise and experience on ICT Applications for Customs, in line with one of the strategic thrusts for customs in the TFSF. Resource Persons included:

The Knowledge Sharing Workshop was attended by representatives of customs authorities of the SASEC countries, the Regional Office for Capacity Building for Asia and the Pacific of the WCO and the Government of Japan. Mr. Surya Prasad Acharya, Director General, Department of Customs, Ministry of Finance, Nepal chaired the workshop. Representatives from Japan International Cooperation Agency and the South Asian Association for Regional Cooperation attended as observers.