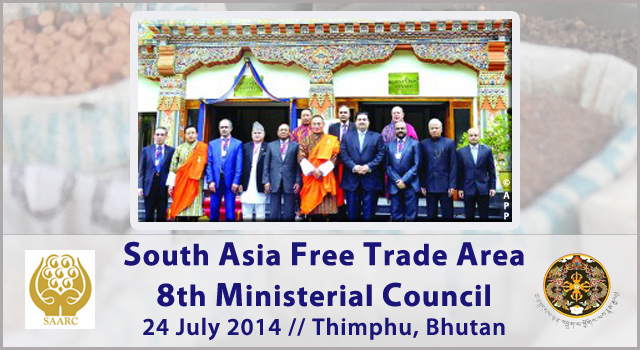 The Royal Kingdom of Bhutan hosted the Eighth Meeting of the South Asia Free Trade Area (SAFTA) Ministerial Council (SMC) in Thimphu, Bhutan on 24 July 2014, its first time to host an SMC event. Increasing regional economic cooperation to boost intra-regional trade among member countries of South Asian Association for Regional Cooperation (SAARC) was the primary agenda of the meeting. Ministers of Commerce and Trade of SAARC member countries comprising the SMC reviewed issues regarding the reduction of sensitive items in trade lists, tariffs and non-tariff barriers, trade facilitation and harmonization of customs policies, promotion of trade and investment among regional countries of SAARC, and increasing intra-regional physical connectivity.

In his inaugural address, Prime Minister Tshering Tobgay emphasized that implementation of SAFTA is one of the success stories of SAARC, and it now needs to translate into free and seamless movement of goods and services in the region. The meeting highlighted the significant reduction of items in member countries' sensitive lists within the period prescribed by the committee—SAFTA requires member countries to trim their sensitive lists by 20% every four years, beginning 2009-2012 (Phase I), 2012-2015 (Phase II), until 2020—especially the list of commodities for least developed countries (LDCs). India's sensitive list for LDCs has decreased by 94%, from 868 to 25 items. The Maldives, on the other hand, has reduced items for LDCs by 77%, with 154 goods left from the original 681. The chart below itemizes the number of commodities in the sensitive lists of member countries before and after the SAFTA reductions: 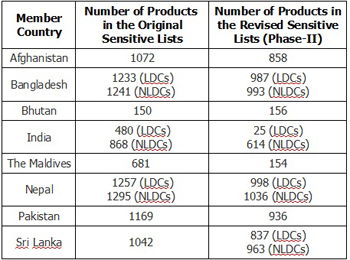 The high-level SMC meeting also implemented the Vehicle Agreement and Railways Agreement, allowing containers to movefreely across the region. Ministers further approved the implementation of the web-based Certificate of Origin (CoO) system.

Establishment of a SAARC Development Bank

The SAFTA Committee of Experts (COE)—which met 22-23 July 2014, also in Thimphu—endorsed to the SMC the establishment of a SAARC Development Bank to finance infrastructure development in the region. The proposal comes as a positive move for South Asian LDCs, plagued by some of the poorest infrastructure in the world and with limited resources to fund improvement of their infrastructure sector. SASEC member countries Bhutan, Bangladesh, the Maldives, Nepal, and Sri Lanka have expressed support for the proposal headed by India.