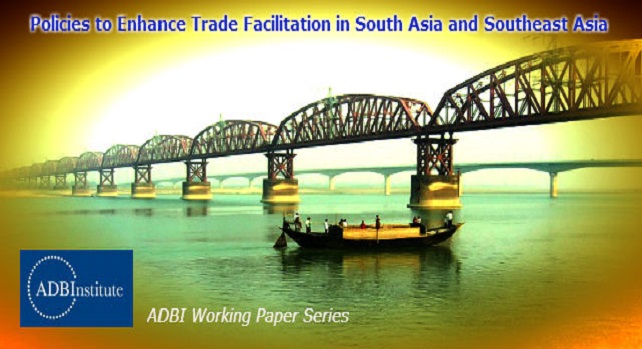 This Asian Development Bank Institute publication identifies the state of play of trade facilitation and provides an overview of intra- and inter-regional trade in South and Southeast Asia. Key challenges and bottlenecks to effective trade facilitation range from the lack of expert human resources such as information technology (IT) specialists in small landlocked countries (Bhutan and Nepal), to the high border transaction costs and severe congestion faced at border crossing points, and the lack of effective dialogue on bilateral enhancement of trade facilitation.

First, South Asian countries such as Bangladesh, Bhutan, and Nepal find it difficult to attract IT specialists to work in the trade facilitation area of Customs administrations, due to low civil service remuneration, geography, migration, and increased competition from the private sector.

Second, the South Asia Subregional Economic Cooperation (SASEC) and Greater Mekong Subregion (GMS) suffer severe congestion at road border-crossing points as a result of huge volumes of pedestrian, non-motorized vehicles, and freight traffic. While SASEC and GMS initiatives focus on trade facilitation infrastructure initiatives to improve border infrastructure and processing, land links between the two regions are unlikely to effectively cope with increased levels of trade in the short- to medium-term. The state of infrastructure, distance, and lack of heavy transport capacity render land routes commercially unattractive. Thus, the majority of trade between South and Southeast Asia will eventually move to sea, increasing the importance of port facilitation.

Third, there is insufficient effective consultation between trade facilitation stakeholders—comprising border agencies and cargo and freight agents, forwarders, and transporters—despite their participation in organizations such as the World Customs Organization, the Association of Southeast Asian Nations, the South Asian Association for Regional Cooperation, and the United Nations Economic and Social Commission for Asia and the Pacific. The lack of discussion on bilateral enhancement of trade facilitation between subregional countries is partly because the meetings of the larger groupings tend to be political in nature and oriented toward control and revenue collection functions, with less interest in private sector involvement.

Regional initiatives such as the South Asia Subregional Economic Cooperation Program aim to address these challenges through customs modernization and harmonization, automation, and the use of international best practices in border procedures.