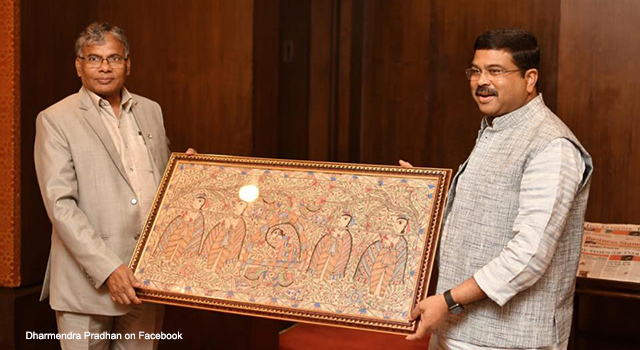 Mr. Dharmendra Pradhan, Minister for Petroleum and Natural Gas, Government of India, and Mr. Matrika Prasad Yadav, Minister for Industry, Commerce and Supply, Government of Nepal, held a bilateral meeting on 28 September 2018 in Kathmandu, Nepal, to discuss strengthening of energy and economic ties between the two countries.

In a post about the bilateral meeting with Mr. Yadav, Mr. Pradhan reiterated the Government of India’s continued commitment to help Nepal meet its complete hydrocarbon requirements.

Mr. Pradhan conducted a site visit to Amlekhganj during his two-day visit to Nepal to check on the progress of the oil pipeline. He estimated construction work to be finished within a year.  He also called on Mr. Ishwor Pokharel, acting Prime Minister of Nepal, Mr. Ram Bahadur Thapa, Minister for Home Affairs, and President Bidya Devi Bhandari.

The Motihari-Amlekhgunj oil pipeline, committed by the two Governments in 2015, is being developed by the Government of India to provide Nepal with an efficient and environment-friendly source of petroleum. Once built, the pipeline is estimated to resolve Nepal’s dependency on tanker trucks and bring the country annual savings worth around Rs 2 billion. According to a report, diesel and cooking gas accounted for 80% of the total fuel import bill of Rs 170 billion (around $26.9 million) in the last fiscal year.