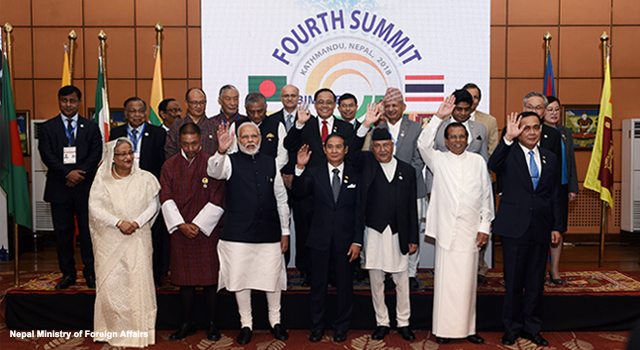 The Government of Nepal hosted the Fourth Bay of Bengal Initiative for Multi-Sectoral Technical and Economic Cooperation (BIMSTEC) Summit on 30-31 August 2018 in Kathmandu, Nepal. All member countries of BIMSTEC participated in the meeting, represented by BIMSTEC heads of state and government—Prime Minister Sheikh Hasina of the People’s Republic of Bangladesh, Chief Justice and Chief Advisor to the Interim Government of the Kingdom of Bhutan Dasho Tshering Wangchuk, Prime Minister Narendra Modi of the Republic of India, President Win Myint of the Republic of the Union of Myanmar, Prime Minister KP Sharma Oli of Nepal, President Maithripala Sirisena of the Democratic Socialist Republic of Sri Lanka, and Prime Minister Prayut Chan-o-cha of the Kingdom of Thailand.

The Summit reaffirmed its commitment to the principles and purposes of BIMSTEC, as enshrined in the 1997 Bangkok Declaration, and to the goal of making the Bay of Bengal region peaceful, prosperous, and sustainable by building on their common strengths through their collective efforts.

In his opening speech, Prime Minister Oli enjoined the leaders of BIMSTEC to aspire for a “prosperous region, and happy people,” through economic integration. He also pressed upon the urgency of cooperating with scale, speed, and substance as an organization to match the potential of the region. The Nepalese Prime Minister also emphasized that BIMSTEC and the South Asian Association for Regional Cooperation (SAARC) are complementary, with Nepal committed to intra- and inter-regional cooperation through both institutions, alongside subregional cooperation through the Bangladesh-Bhutan-India-Nepal (BBIN).

All seven leaders of BIMSTEC member nations deliberated on the status of cooperation, and agreed on several decisions to move the regional process forward. The Summit, in the Declaration signed by all seven leaders of BIMSTEC countries, committed to deliver results in various sectors, including poverty alleviation, connectivity, trade and investment, people-to-people contact, and tourism. The Declaration highlighted

Moving forward, the BIMSTEC Summit also decided to prepare a draft Charter defining the organization’s long-term vision and priorities for cooperation, for endorsement in the Fifth Summit. The Summit also agreed to develop the Rules of Procedure for the BIMSTEC Mechanisms, and will explore the possibility of establishing a BIMSTEC Development Fund using voluntary contributions from the Member States.

The Summit also recognized the need to review, restructure, and rationalize the existing areas of cooperation and streamline the activities. In her speech, Prime Minister Hasina proposed categorizing the current 14 BIMSTEC sectors into several strategic clusters, such as sustainable development, security and stability, and people-to-people contact, to achieve synergy and reap early dividends for the region.