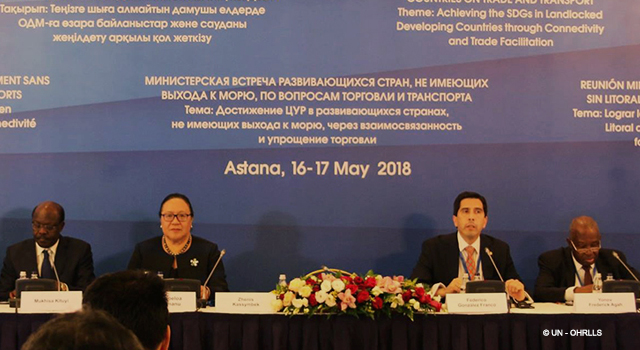 The 9th Annual Ministerial Meeting of Landlocked Developing Countries (LLDCs) on Trade and Transport was held on 16-17 May 2018 in Astana, Kazakhstan. The Meeting discussed key issues in transport, transit cooperation, trade, and trade facilitation among LLDCs, and identified recommendations for cooperation toward implementing the Vienna Programme of Action (VPoA) and the 2030 Agenda for Sustainable Development. The theme of the Meeting was "Achieving the Sustainable Development Goals (SDGs) in LLDCs through Connectivity and Trade Facilitation."

In his opening speech, Ambassador Federico Alberto González Franco, Vice Minister, the Ministry of Foreign Affairs of Paraguay and Chair of the Group of LLDCs and Coordinator of the Group of LLDCs on matters related to trade and development in Geneva, highlighted the urgent need to address trade and transport-related issues of LLDCs, since their growth and development goals depend heavily on their capacity to advance their physical and virtual connectivity. He stressed the importance of the meeting in the upcoming mid-term review of the VPoA, set for 2019.

SASEC LLDC members Bhutan and Nepal sent delegations to the Meeting. In the Ministerial Level Exchange of Views on National Experiences, Bhutan, represented by Mr. Lekey Dorji, Minister of Economic Affairs, Royal Government of Bhutan, highlighted how Bhutan is mainstreaming trade into its national development agenda. The trade facilitation program is now reflected as an annual plan of action.

As a landlocked nation, Bhutan is dependent upon regional and bilateral trade agreements that require member states to work on harmonization of standards, customs clearance procedures, and promotion of transit facilities, in their trade facilitation and transit arrangements. Mr. Dorji shared initiatives connecting the country to global markets:

Nepal, represented by Mr. Chandra Kumar Ghimire, Secretary for Ministry of Industry, Commerce and Supplies, Government of Nepal, emphasized the importance of a secure, reliable, and efficient transit and transport system to reduce transaction cost and enhance value addition of goods from LLDCs. He shared that the Government of Nepal’s focus to implement the Trade Facilitation Agreement and other complementary measures has enabled the country to achieve significant progress on transport connectivity and trade facilitation. He highlighted the following initiatives by the Government of Nepal:

The Meeting adopted the Astana declaration to improve the connectivity of the LLDCs and assist them in harnessing their trade potential. The Declaration underscores areas critical to accelerate the implementation of the VPoA and the 2030 Agenda for Sustainable Development.

Ms. Fekitamoeloa Katoa ‘Utoikamanu, Under-Secretary General and High Representative, United Nations Office of the High Representative for the Least Developed Countries, LLDCs, and Small Island Developing States (UN-OHRLLS), in her closing speech, lauded the meeting's success in providing a platform among LLDCs to share experiences and lessons learned, and highlighting initiatives that support promotion of connectivity and trade in the LLDCs. She further reiterated the need to increase the hardware or physical infrastructure to improve the connectivity of LLDCs, as well as complementary software for trade facilitation. She urged the government participants and development partners to increase efforts to mobilize resources to close the infrastructure gap; and build capacity for developing bankable projects, for collection of and monitoring of data and reliable indicators on infrastructure development and for long term planning. She also placed emphasis on partnerships and enhanced international support.

The Global Chair of the Group of LLDCs urged the attendees to focus on delivering what was promised, with the comprehensive Ministerial declaration serving as a way forward. He asked for continuous support from development partners, to assist in efforts that will ultimately support the implementation of the VPoA and the SDGs.