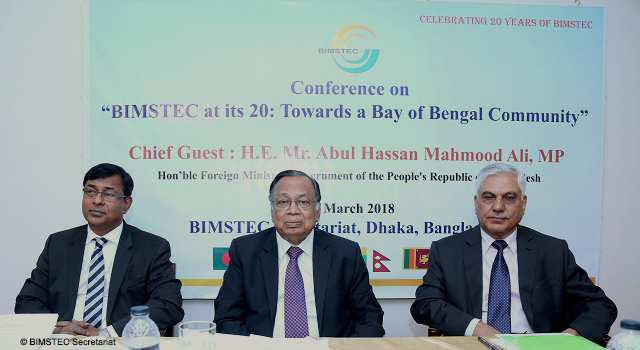 The Bay of Bengal Initiative for Multi-Sectoral Technical and Economic Cooperation (BIMSTEC) conference, "BIMSTEC at its 20: Towards a Bay of Bengal Community," was held in Dhaka, Bangladesh on 20 March 2018. Convening scholars, think-tanks, government officials, diplomats, business leaders, and other stakeholders from BIMSTEC member countries—Bangladesh, Bhutan, India, Myanmar, Nepal, Sri Lanka, and Thailand—the conference took stock of the inter-regional organization's achievements and milestones, and aimed to chart a new direction for the future. Main objectives of the conference were to i) examine the potential and challenges of the BIMSTEC region; and (ii) discuss development of the BIMSTEC Secretariat’s future work plan, and giving its work more visibility.

The conference highlighted the organization's linkages to South and Southeast Asia, and its huge potential for trade—with around 1.5 billion people, or approximately 21% of the world population, living in the region. It was divided into four working sessions: role of connectivity in BIMSTEC integration, role of people-to-people contact in BIMSTEC integration, security cooperation in the Bay of Bengal region, and economic integration in the Bay of Bengal region.

In his address during the opening ceremony, Bangladesh Foreign Minister AH Mahmood Ali focused on the importance of being a result-driven organization. He reiterated the region's untapped potential, and called on BIMSTEC to serve as a forum for economic cooperation. According to him, inter-regional trade volume in the BIMSTEC region can increase from 7% to 21% by accelerating and removing roadblocks to trade. He underscored that four BIMSTEC members—Bangladesh, Bhutan, Nepal, and Myanmar—are in the process of graduating from the "Least Developed Countries" category. Cooperation in BIMSTEC can help them sustain their momentum of development and progress.

Dr. Gowher Rizvi, Adviser on International Affairs to Bangladesh Prime Minister Sheikh Hasina, underscored BIMSTEC's potential in supporting harmonization and standardization of rules in the region to help boost regional cooperation, trade, connectivity, investment, and people-to-people movement. BIMSTEC can also play a key role in the blue economy along the Bay of Bengal. While each BIMSTEC member country is pursuing blue economy at the national level, BIMSTEC could provide regional institutional mechanisms.

High Commissioner of India, Mr. Harsh Vardhan Shringla, emphasized the capacity of BIMSTEC to fulfill key priorities of India's "Neighborhood First" and "Act East" foreign policy. Recalling the momentum gathered after the BIMSTEC Leaders' Retreat in Goa in 2016 where member states agreed to develop a Master Plan on Connectivity that would promote transport linkages, he stressed the importance of connectivity in cooperation under the BIMSTEC process, and in providing the backbone for a regional integration arrangement.