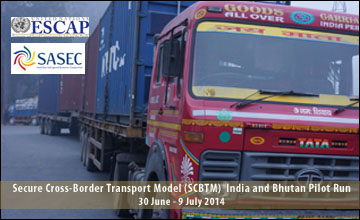 The Royal Kingdom of Bhutan and India are moving to more sophisticated technologies in an effort to increase trade efficiencies between the two countries. In May 2014, government officials from Bhutan and India agreed to embark on a feasibility study that will pilot UNESCAP's Secure Cross-Border Transport Model (SCBTM) along key trade corridors, aimed at speeding up and reducing the cost of trade through designated land routes and border-crossing points.

The SCBTM is designed to optimize the use of technology and institutional mechanisms that both secure transit cargo and reduce the cost and time of clearing cargo at borders. Through its use of global positioning systems, cellular communications, geographical information systems, radio frequency identification, web-based software and others, the SCBTM is able to address the concerns of national Customs administrations and other control authorities, such as the authenticity of declarations and safety of cargo.

A limited pilot run of the SCBTM from Kolkata to Thimphu via Phuenthsholing, will be conducted from 30 June to 9 July 2014, with information and briefing sessions being held in Delhi, Kolkata, and Jaigaon in India, and Puentsholing and Thimphu in Bhutan. This limited pilot test will:

Customs officials of the Governments of Bhutan and India will participate in the pilot testing, together with private stakeholders (e.g., exporters, brokers, transporters) from both countries, and staff and consultants of the Asian Development Bank and the United Nations Economic and Social Commission for Asia and the Pacific.