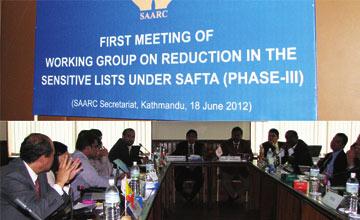 The SAARC Working Group noted that under Phase II all member states had already reduced their respective Sensitive Lists by a minimum of 20%. Bhutan India and Maldives had made substantial reductions in their lists which in fact were significantly more than the previously mandated reduction level.

The meeting focused on several modalities for further reductions in the lists under SAFTA and for further liberalization of trade in the region. A final decision on the modality to be adopted by member states will be taken at the second meeting of the Working Group on Reduction in the Sensitive Lists under SAFTA Phase III.