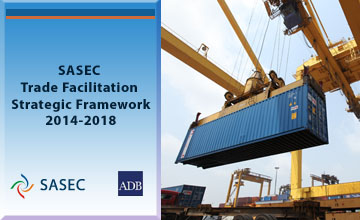 SASEC countries Bangladesh, Bhutan, India, and Nepal have endorsed the SASEC Trade Facilitation Strategic Framework 2014–2018 (TF Strategy) for implementation. The TF Strategy supports the mission of the SASEC Transport and Trade Facilitation Strategy “to promote the prosperity of the subregion by facilitating the efficient movement of trade across the borders”. The more specific goal for trade facilitation activities under SASEC during 2014–2018 is to increase intra-regional trade through increased intra-regional trade facilitation efficiency and to reduce the time and costs associated with trade.

The overall strategy aims to help member countries raise border clearance practices and processes to international standards and put in place international best practices, including through the introduction and enhancement of automation. Trade facilitation is already taking a high priority at the national level, creating a regional platform will further complement and strengthen national actions through the sharing of information and experience, and promotion of joint and coordinated action.

Strategic thrusts under each priority area further define the steps identified to implement the TF Strategy throughout the subregion:

South Asia is among the least integrated region in the world: bottlenecks in trade facilitation have been identified as the leading nontariff barriers, which reduce intra-regional trade. SASEC countries generally rank low in the World Bank “league tables”. In 2011 for instance, Bangladesh, Bhutan, and Nepal ranked in the lower half of the Doing Business Survey. They were classified as belonging to the “logistics unfriendly” countries in the Logistics Performance Index (LPI). India has been the exception.

To address such issues, SASEC member countries are increasingly prioritizing measures to improve trade facilitation, while recognizing the enormous challenges and potential in this sector. Estimates of the impact of effective trade facilitation on trade flows, industry competitiveness, and overall welfare indicate that significant incremental benefits would emanate from improvements in trade facilitation. Recent modeling work for South Asia showed that

the removal of tariffs have relatively lower impact on trade than for improvements in trade facilitation
trade facilitation reforms will have large impacts on South Asian countries’ trade among themselves and the rest of the world
lowering border costs will enhance greater outsourcing potentials for greater cost competitiveness and will impact significantly on intra-regional trade such as in textiles and clothing in Bangladesh, and for the automobile and other manufacturing industries in India.

The first two years of the TF Strategy will focus on customs modernization and harmonization, as well as institution and capacity building.

SASEC countries will implement the TF Strategy, together with resources from bilateral and multilateral resources. Multilateral institutions that are currently actively engaged in SASEC’s trade facilitation initiatives (ADB, UNESCAP and WCO) are committed to continue providing financial and technical support for the implementation of the various initiatives. They will also help countries generate private sector interest and participation in the trade facilitation initiatives.