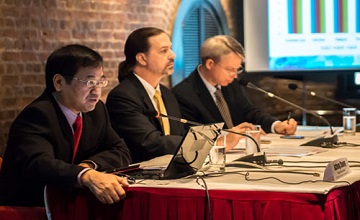 The special theme chapter of ADO 2014 notes that 80% of the region’s population lived in countries with worsening inequality during 1990s and 2000s, and that developing Asia lags behind other regions in public investment to promote equity. The regional growth outlook is dependent on continued recovery of major industrial economies and the need to better use fiscal policies to address widening income gaps.

South Asia remains one of the slowest growing subregions—although growth is forecast to improve by 5.3% in 2014 and 5.8% in 2015. Inflation in South Asia is expected to increase to 6.4% in 2014, before subsiding to 6.2% in 2015 on country-specific factors such as currency depreciation, pressures on food prices, and energy price adjustments as subsidies are withdrawn.

Inland waterways is an important pillar of ‘Arth-Ganga,’ a project that aims to channelize economic activity along the...