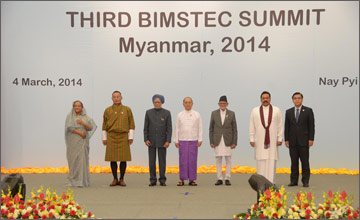 The Third Bay of Bengal Initiative for Multisectoral Technical and Economic Cooperation (BIMSTEC) Summit of Leaders and related events was held on 1-4 March 2014 in Nay Pyi Taw, Myanmar. The Summit further strengthened the resolve of the Member States – Bangladesh, Bhutan, India, Myanmar, Nepal, Thailand, and Sri Lanka – to achieve the program’s founding aims of creating an enabling environment rapid economic development, accelerating social progress in the sub-region, and promoting active collaboration and mutual assistance on matters of common interest.

Mr. Sumith Nakandala of Sri Lanka was welcomed as the first Secretary General of BIMSTEC. The Leaders also expressed appreciation to the Government of the People’s Republic of Bangladesh for providing the premises for the BIMSTEC Secretariat in Dhaka and the progress made towards its operationalization.