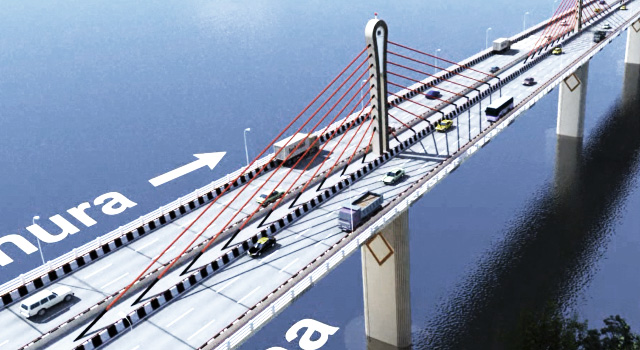 The Ganges flows through the middle of Bihar, India, physically dividing it into north and south. Roads and bridges are particularly poor in the north, cutting off people from better services and opportunities. Enhanced connectivity can improve lives and livelihoods, especially if the infrastructure is climate-sensitive. Ms. Saleha Waseem, Operations Communications Specialist at the Asian Development Bank’s South Asia Regional Department, shows how improving transport links would make a huge difference to millions of people.

This item was first published on ADB's Asian Development Blog.

Imagine you’re the proprietor of a mid-sized logistics company in Kolkata, India. Your trucks pick up goods from port and transport them to Nepal via the border city of Raxaul in Bihar state. The 726-kilometer (km) journey takes about 20 hours non-stop in dry weather, much longer during the monsoon.

Or perhaps you’re a village headman in Raghopur Diara, a river island in Bihar on the mighty Ganges River that each year is partially submerged in monsoon season. The flood brings a new layer of topsoil that makes the land very fertile, but this advantage is offset when Raghopur Diara is cut off from the mainland for months by rising waters.

For millions of people in situations like these, better transport links would make a huge difference. Indeed, upgrading connections to sources of employment, markets and services like education and health is key for Bihar, India’s third most populous state. Substandard transport connections hold back the enormous potential of its agriculture sector, despite an advantageous location bordering the large states of Uttar Pradesh and West Bengal as well as southern Nepal.

The Ganges flows through the middle of the state, physically dividing it into north and south. Roads and bridges are particularly poor in the north. Only four bridges linking it to the southern belt along a 200-km section of the Ganges are operational, and they can’t meet traffic demands as the area’s population climbs. Another obstacle is the width of the Ganges, which often exceeds 2 km throughout Bihar.

The people of Bihar need modern roads and bridges to connect with better services and opportunities to boost their incomes. Enhanced connectivity can improve lives and livelihoods, especially if the infrastructure is climate-sensitive.

Work will soon begin on a new piece of infrastructure that will help fill the urgent need for bridge connections in Bihar. The new Ganga Bridge, supported by the Asian Development Bank, will be built 10 km downstream and east of the capital Patna and is likely to be India’s longest river bridge with a length of almost 10 km once completed.

The $715 million bridge will allow better traffic distribution on the international and regional trade corridors connecting the eastern, northern and northeastern states of India with Nepal. It is likewise expected to reduce traffic bottlenecks and allow swifter movement of goods between Nepal and India. This will be a boon for transit exporters in both countries.

The bridge’s six-lanes will help businesses by connecting them to nearby national highways along the north and south banks of the Ganges, and diverting traffic away from the deteriorating old bridge that now serves as the main transport link between the northern and southern regions of Bihar. It will also give the people of Raghopur Diara—situated between two channels of the Ganges and dependent on boats and a seasonal pontoon bridge to reach Patna—year-round access to the mainland.

With easier access to Patna and other centers, residents of Raghopur Diara will be able to use various commercial and public services. For a village headman, this could make it easier for people in the area he administers to access social services such as health and for farmers and fishers to sell their goods at market. Another potential benefit for the river island, where the average literacy rate is only 33%, lies in attracting qualified teachers to local schools. The Bihar state government plans to eventually develop Raghopur Diara as a futuristic satellite township of Patna, once both urban centers are connected by the new Ganga Bridge.

For farmers, the new bridge will be a game-changer that will enable them to easily sell their produce in other parts of of Bihar and throughout India, even to neighboring countries like Bangladesh and Nepal under the South Asia Subregional Economic Cooperation framework.

Imagine the impact on farmer incomes if vegetables from Bihar, which already produces around 10% of India’s greens, could be easily transported and sold not just in nearby Nepal but across India’s vast market.

That’s just a dream at the moment, but in a few years could be reality.