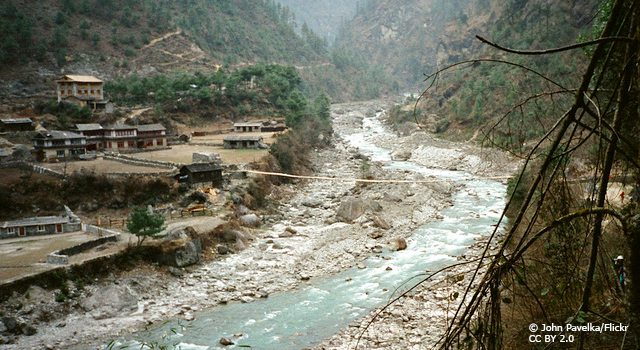 Transboundary rivers between India and Nepal have huge hydropower and irrigation potential. According to this commentary by Mr. Asit K. Biswas, Distinguished Visiting Professor at the Lee Kuan Yew School of Public Policy, National University of Singapore (NUS), and Ms. Cecilia Tortajada, Senior Research Fellow at the Institute of Water Policy, Lee Kuan Yew School of Public Policy, NUS, developing these rivers can become an engine for regional development, alleviating poverty for millions of people within a reasonable timeframe. With improved relations between Bangladesh, Bhutan, India and Nepal, formulating and implementing sustainable plans to manage these rivers presents a significant win-win opportunity for the subregion.

Socially and economically, the performance of the four northern Indian states (Bihar, Madhya Pradesh, Rajasthan and Uttar Pradesh) collectively known as BIMARU (meaning ‘sick’ in Hindi) and neighbouring Nepal has left much to be desired. Together, they constitute one of the most deprived regions of the world. But tapping the region’s water resources may just quench its thirst for development.

With a population of 103 million, Bihar is nearly four times the size of neighbouring Nepal (28 million). But per capita income in Bihar was only 40.6 per cent of the Indian average in 2014–15, and nearly one in three of India’s poor live in the state. The situation is much worse in Bihar’s rural north.

Across the border, Nepal shares many similar characteristics. One in four Nepalese live below the poverty line and nearly 80 per cent of the population live in rural areas. In the mid-west and far-west regions, rural poverty is around 45 per cent.

As in Nepal, agriculture is the largest employment sector in Bihar (80 per cent), but contributes only 20 per cent to its GDP. Endemic unemployment and underemployment are common problems and many migrate to find employment: Biharis to other Indian states, and Nepalese to wealthier Middle Eastern and Southeast Asian countries. There they are mostly employed in so-called ‘3D jobs’: dirty, difficult and dangerous.

A good starting point to improve the economic situation in both Bihar and Nepal could be developing transboundary rivers, which have huge hydropower and irrigation potential. Properly planned, these rivers can act as an engine for regional development. Nepal has very large hydropower potential (42,133 megawatts), only 2 per cent of which has been developed. India’s potential is 150,000 megawatts, 73 per cent of which remains undeveloped. Since hydropower is a non-consumptive user of water, it can also be used for irrigation after power generation. Both Nepal and Bihar suffer from a lack of assured water supply for all uses.

Such development in Nepal and Bihar could start with the Kosi River basin. The 88,000 square kilometre basin is Nepal’s largest and home to over 40 million people across Nepal and India. Floods are a serious hazard. But the river also has enormous hydropower and irrigation potential.

In India, the Kosi River catchment covers only one state: Bihar. This is a unique advantage since water is a state subject in India. All other major transboundary river basins in Nepal and India cross state boundaries. If two or more states are involved, the complexities of even reaching an agreement between them, the Indian Government, and finally Nepal, are likely to increase many-fold.

A good development plan, with structural and non-structural flood control measures, will also significantly improve economic conditions for millions of people in the basin.

To reduce flood hazards, under the 1954 Kosi Treaty between India and Nepal, India designed, built and maintains the Kosi barrage in Nepal, as well as a 32 kilometre stretch of embankments in Nepalese territory. Since its completion in 1959, the structures have impeded the flow of high sediment loads in the river, which have instead built up on the river bed. Over time, the bed level of the Kosi River in many places rose four metres higher than the surrounding land.

Surprisingly, the water level of the 2008 flood was not particularly high. But because of endemic corruption among Indian and Nepali contractors, politicians and bureaucrats, the embankments were neither properly constructed nor properly monitored and maintained. The floods were a disaster waiting to happen.

The Kosi Treaty also has fundamental structural problems. Bihar’s — not Nepal’s — Water Resources Department (WRD) is responsible for monitoring and maintaining the embankments in Nepal. Yet the WRD must go through India’s national government to communicate with the Nepalese government, delaying responses to flood emergencies. India and Nepal need to forge better relations and formulate and implement sustainable plans for managing their transboundary rivers, especially the Kosi.

The timing now seems to be right with improved relations between Bangladesh, Bhutan, India and Nepal (BBIN). At the BBIN subgroup meeting in Dhaka in January 2016, the four countries agreed to work on specific water projects, electricity trade, inter-grid connectivity, and flood forecasting. This presents a significant win-win opportunity for all four if this development progresses further.

Nepal and Bhutan can develop hydropower which their energy-hungry neighbours India and Bangladesh can use after domestic needs have been met. India can provide transmission lines in small sections of its territory to connect the electricity supply to Bangladesh. As a quid pro quo, Bangladesh could grant transhipment rights through its territory so that goods could be transported by road to north-eastern India. With some give and take, a BBIN regional agreement could take shape which would significantly improve their economic and social conditions, and potentially increase India’s trade with South Asia by about 60 per cent.

This integration and cooperation could be further aided by a neutral and competent ‘honest broker’ in the form of the International Centre for Integrated Mountain Development (ICIMOD). ICIMOD can also provide expertise on issues such as climate change and flood warning systems to help formulate appropriate development policies.

But regional cooperation will not be easy. India and Nepal must first overcome decades of mistrust and hostility. Then there is the thriving informal economy. Rent-seekers are doing a roaring trade due to inefficiencies, non-transparency and the inadequacy of trade facilities between Nepal and Bihar. These rent-seekers are politically and bureaucratically well-connected and will strongly resist any attempt to streamline trade and current transportation logistics.

Still, despite these constraints, there are no real alternatives to sustainably developing transboundary rivers like the Kosi. Such development will alleviate poverty for millions of people within a reasonable timeframe.