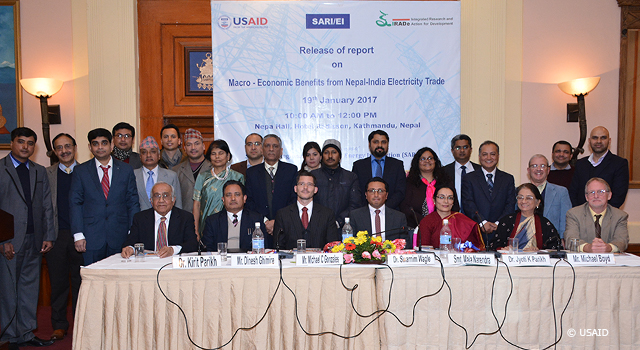 The Integrated Research and Action for Development (IRADE) initiative, under the South Asia Regional Initiative for Energy Integration Program supported by the United States Agency for International Development, launched the analytical study “Economic Benefits from Nepal-India Electricity Trade,” as an initial step into examining the impact of cross-border electricity trade in the South Asian region.

The report confirms that a large economically feasible electricity export potential exists, and highlights that facilitating cross-border trade of electricity between Nepal and India will benefit both countries. Under the accelerated power trade (APT) scenario, earnings in electricity trade revenue could bring the hydropower-rich country $404 million (NPR 44 billion) in 2025, $2.8 billion in 2030 (NPR 310 billion), and $9.8 billion (NPR 1,069 billion) in 2045—potentially bringing Nepal's gross domestic product to over $120 billion (NPR 13,100 billion) in 2045. These substantial economic gains would boost Nepal's economy and improve the well-being of its people.

The study urges putting in place necessary policy, institutional, and technical infrastructure needed to materialize Nepal-India electricity trade, to allow both countries to reap the benefits. With the endorsement of the South Asian Association for Regional Cooperation Framework Agreement for Energy by the Nepal Parliament and 'Guidelines on Cross-Border Electricity Trade' issued by the Indian Government, more work at intra- and inter-country level should be undertaken.

Smt. Narendra called the findings a 'win-win' opportunity for both India and Nepal, and re-affirmed India's commitment to cross-border electricity trade. Dr. Wagle thanked IRADE for the report, which could help Nepal as it expands its transmission capacity, and noted that the South Asian region stands to reap benefits from the power trade.