Commentary: South Asia Could Be Linchpin for Regional Integration 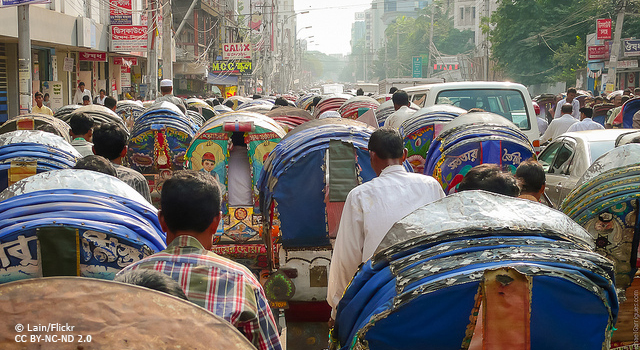 With South Asia's untapped market of about 1.7 billion people, annual growth rate of 6.3% in 2012-2014, improved political environment, and a large and dynamic labor force that can support industrialization by boosting supply chains and services, South Asia is set to play a strategic role in Asian integration. This commentary by Mr. Ganeshan Wignaraja, Advisor in the Asian Development Bank’s Economic Research and Regional Cooperation Department, shares how linking emerging South Asia with the more developed member countries of the Association of South East Asian Nations will transform regional economies through development of regional connectivity, and create a huge regional market of 2-3 billion people.

South Asia Could Be Linchpin for Regional Integration

As the world deals with the "new normal" of a slowing China, regional financial and economic integration is more important than ever, and South Asia is strategically poised to play an influential part.

Second, South Asia is one of the few bright spots for growth in a global economy that is adjusting itself to China's slowdown. South Asia as a whole grew at an annual rate of 6.3% from 2012 to 2014, matching the average growth rate for developing Asia in the same period.

The Asian Development Bank projects South Asia's growth to accelerate to 6.9% in 2015 and 7.3% in 2016, which exceeds forecasts for developing Asia. Both South Asia and developing Asia grew faster than the industrialized economies of the U.S., Japan and Europe between 2012 and 2014.

Fourth, amid growing concerns about aging populations in East Asian economies and the effects of a declining working population, South Asia is blessed with a large and dynamic labor force.

About 52% of South Asia's population is of working age, defined as those age 15 and above. That figure is higher in several South Asian countries, including Bangladesh and Nepal.

A cheap and increasingly literate workforce can help with the industrialization of South Asia as global demand increases for supply chains and services, including in information technology, professional services, tourism and construction.

Furthermore, linking emerging South Asia with the more developed countries of the Association of Southeast Asian Nations makes economic sense. It can create a huge regional market of 2.3 billion people that can transform regional economies.

On Nov. 22, at the ASEAN summit in Kuala Lumpur, leaders announced the launch of the ASEAN Community and ASEAN's Vision beyond 2015.

The end of 2015 will thus see the inauguration of the ASEAN Economic Community one of the three elements of the ASEAN Community, which will create an integrated market and production base among the 10-member nations. This will create an ASEAN grouping with 620 million people and a combined gross domestic product of $2.4 trillion. In addition, the opening up of Myanmar, which can serve as a gateway between South Asia and Southeast Asia, increases the potential for infrastructure-led integration.

The best-case scenario for deep integration will include the removal of all tariffs and a 50% reduction in nontariff barriers associated with South Asian and Southeast Asian trade, with a 15% reduction in trade costs reflecting improved trade facilitation and infrastructure investments.

The study also found that only $73 billion is required to meet the total cost of infrastructure investments to link South Asia and Southeast Asia. This figure includes $34 billion for railway projects, $18 billion for road projects, $11 billion for port projects and $10 billion for energy trading projects.

Infrastructure holes lie mainly in Myanmar, but gaps also exist in Bangladesh, Cambodia, Laos, Thailand and Vietnam. These relate mainly to missing road and railway links that need to be constructed, transport links, such as roads connecting major highways, that need to be upgraded, incompatibilities in railway gauges that have to be overcome and railways that need to be modernized.

The study also suggests that public-private partnerships can help finance regional infrastructure projects, particularly in the region's more developed economies. Such projects are difficult to finance from private financial markets alone because of the high risks and long gestation periods.

The creation of a few demonstration PPP projects backed by capacity building and advisory services is useful to increase demand for such partnerships. Improving political risk guarantees, transparency, regulatory frameworks, coordination support and governance of PPP projects can stimulate the supply of such funds.

Finally, the study suggests that coordinating the planning and implementation of regional infrastructure projects is challenging. This is because of various overlapping regional institutions with different mandates and capacity to manage and finance infrastructure projects. Multilateral and regional development banks can play a useful role as honest brokers and provide knowledge to facilitate regional connectivity.

Over time, the economic links between South Asia and Southeast Asia could be expanded to larger East Asian economies such as Japan and China through the Regional Comprehensive Economic Partnership, a planned mega-regional trade group. Negotiations for the RCEP began in early 2013 among 16 economies, including the 10 ASEAN members, Japan, China, South Korea, India, Australia and New Zealand.

An eventual RCEP deal would cover trade in goods and services and establish investment rules, among other issues. The RCEP would be able to help stimulate the spread of sophisticated production networks and supply chains to South Asia. It would also create a large trade bloc representing 49% of the world's population and 30% of its GDP.

India is the only South Asian economy participating in the RCEP negotiations. But once an agreement is reached, probably in late 2016 or early 2017, other South Asian economies may wish to join the process to avoid the economic and political pitfalls of being left out. Some commentators suggest that India might play a key role in advocating the case for including its South Asian neighbors in the RCEP.

There is a historic opportunity for South Asia to act as a bridge for Asian integration. Improved infrastructure between South Asia and Southeast Asia can lay the foundations for deepening trade and investment relations with Japan, China and other East Asian nations. Large mutual benefits can be expected for both South Asian and East Asian economies as a result of closer regional integration and cooperation. In addition, the financial cost is likely to be manageable. With concerted national and regional policy action, the integration of South Asia and East Asia can become a reality.