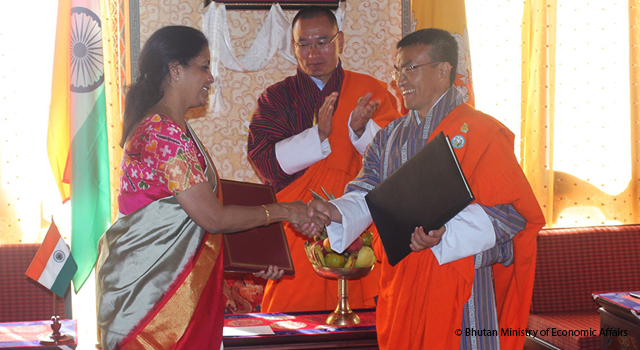 The new India-Bhutan Trade, Commerce and Transit Agreement was signed by the Governments of India and Bhutan, represented by India Commerce Minister Nirmala Sitharaman and Bhutan Minister for Economic Affairs Lekey Dorji, on 12 November 2016, in Thimphu, Bhutan. The bilateral Agreement focuses on promoting trade between the two countries through trade facilitation, improving trade procedures by reducing paper documentation, and adding exit and entry points to facilitate Bhutan's third-country trade.

The Agreement provides for a free trade regime between India and Bhutan, and duty-free transit of Bhutanese merchandise.

India's Commerce Ministry is optimistic that the Agreement will further strengthen India-Bhutan relations.

The National Assembly of Bhutan is expected to ratify the new bilateral agreement.