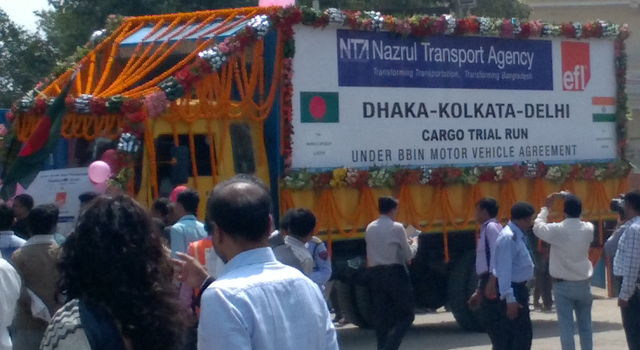 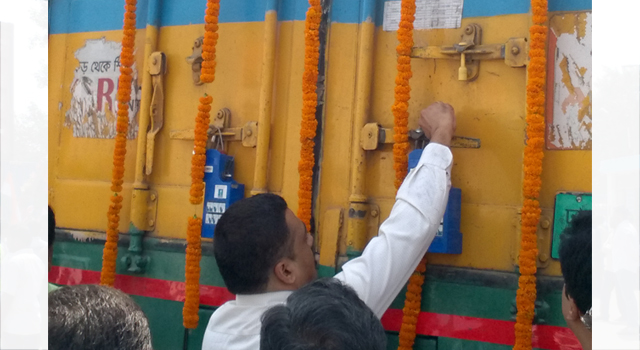 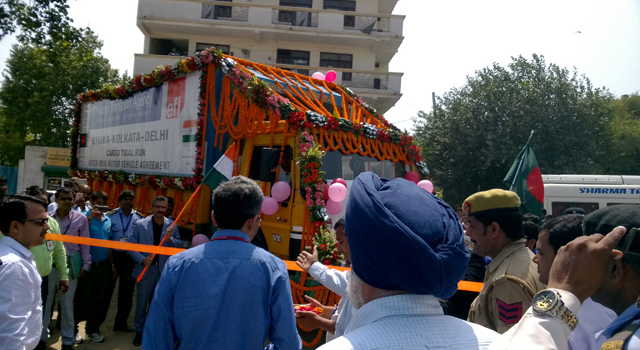 A new chapter in trade relations and people-to-people contact between India, Bangladesh, Bhutan, and Nepal was initiated on 5 September 2016, as a Bangladeshi truck laden with an imported consignment of ready-made garments, rolled into the Customs Inland Container Depot (ICD), Patparganj, Delhi. Though the vehicle entered India through Petrapole Land Customs Station, Customs clearance was done at the ICD, Patparganj.

The cargo truck played a crucial part in the trial run of the Bangladesh-Bhutan-India-Nepal (BBIN) Motor Vehicles Agreement for the Regulation of Passenger and Cargo Vehicular Traffic (MVA), which was signed in Thimphu, Bhutan, on 15 June 2015 by the Transport Ministers of the four countries.

The vehicle was equipped with GPS tracking equipment at Petrapole and the cargo was sealed electronically. This helped to ‘live track’ the vehicle as it moved from Petrapole to New Delhi, with an alert mechanism in case of any attempt to tamper with the cargo. The vehicle was allowed movement under a bond without imposing any additional requirements such as bank guarantees.

The MVA allows vehicles registered in any of the BBIN countries to cross borders along agreed routes, and enter any of the other BBIN countries. Such seamless connectivity contributes significantly to faster and cheaper movement of goods and people among the countries. It avoids the need for the unwieldy practice of border trans-shipment of goods, and allows Customs-sealed vehicles/containers to transit all the way to an ICD in the country of import, for clearance. Consequently, border congestion is reduced and trade can clear cargo at a location close to them. As the MVA also covers movement of passenger vehicles, it will deepen people-to-people contact and boost tourism.

Three countries—Bangladesh, India and Nepal—have already ratified the MVA and Bhutan is in the process of completing its ratification formalities. To help finalize the BBIN MVA Protocols that will facilitate trade and maintain balance with effective controls, the countries had agreed to conduct trial runs of vehicles.

The first cargo trial run was conducted by DHL between Kolkata and Agartala through Bangladesh on 1-3 November 2015. The second trial run of vehicles covered a distance of about 1780 kilometers, from Dhaka to Delhi on 29 August-5 September 2016. The second trial run was conducted under the real-life conditions anticipated under the BBIN MVA: the experience gained during this trial run will be used in fine-tuning the procedures, documentation, and other operating provisions.

“This is yet another measure in a series of trade facilitation initiatives taken by the Government recently to help businesses cut transaction costs. The compulsion to tranship goods at the borders with our neighbouring countries has been a major and longstanding pain point hindering free flow of trade. The measure would not only relieve that pain but also allow the BBIN region to more fully exploit its potential for integration through trade.”

The Chairman and Managing Director of Central Warehousing Corporation, Mr Harpreet Singh, officials from Bangladesh High Commission, the Ministry of External Affairs, and the Ministry of Road Transport and Highways, were also present at the IDC, Patparganj. The private sector also welcomes the benefits for trade facilitation felt under the BBIN MVA, as shared by the Country Head for Marks and Spencer, Ms. Nidhi Dua.