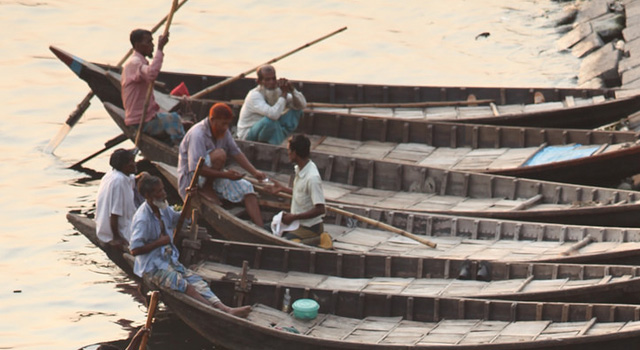 River management provides opportunities to release the regenerative capacities of the people and environment of basin-wide areas. The following article by former professor of economics Mr. Sarwar Md. Saifullah Khaled suggests South Asian countries cooperate to fulfill a promise of greater sustainability. Cooperation in water resource management can serve as a catalyst for broader regional cooperation, economic integration, and development.

It has been some time now that Bangladesh is promoting the idea of basin-wide management of rivers at various levels of interactions with the riparian countries, including in the Bangladesh-Bhutan-Nepal-India (BBIN) forum. Bangladesh has again pitched for efficient management of trans-boundary water resources for the prosperity of South Asia region at a seminar in India's Meghalaya state on 15 July 2016.

Historically, societies have always been located near rivers, due partly to the fact that rivers enable more efficient travel compared to land route. Waterways are also important for transportation of goods throughout the world. Rivers drive critical natural processes that have shaped the evolution of life on our Planet Earth, as well as human civilisation as it progresses. Researchers conclude that healthy rivers are the most critical natural component for sustaining life on the earth.

Managing rivers, although a challenge, provides us opportunities — the opportunities for unleashing the regenerative capacities of the people and environment of basin-wide areas. Rivers connect the webs of life. These days, globally, the riverine ecosystem is facing crisis — crisis that emanates from increased human need. The drivers of river degradation are numerous. While various forms of pollution impair the quality of our rivers' water, dams impact both water quality and the very flow of rivers. Roughly two-thirds of the world's rivers have suffered harm from numerous dams that have been built over the past century. Many of the world's great rivers no longer reach the ocean, turning once productive deltas into near-deserts. This leads us to think about the ways to battle this growing danger.

Therefore, we have to seize opportunities to redirect human and economic development involving water, energy, and food production systems in order to protect and regenerate river health. As many as 57 rivers that flow through Bangladesh before reaching the Bay of Bengal are international. Out of these, 54 rivers are coming through Indian territories. Technically speaking, these can elicit cooperation or conflict. The choice between the two will for a large part be determined by perceptions of their relative benefits. Historians would agree, all international rivers create some degree of tension among the societies that they bind. This tension and its responses are catalysed by many factors, historic, cultural, economic and environmental.

Let us now look at the situation prevailing in our region. The relation of Bangladesh with the North-Eastern states of India occupies an important space in the overall Bangladesh-India bilateral relations. Bangladesh is looking at greater economic integration between Bangladesh and India's North-East for mutual benefit. This would particularly facilitate North-East's socio-economic development and better connectivity with rest of India. Complementing India's endeavour to develop its North-East is also to some extent in Bangladesh's own interest. Apart from the important security dimension which both the countries should not lose sight of, the significant benefit that they both can reap is through trade and connectivity. Both have also very good and friendly bilateral relations with Nepal and Bhutan. As a result, these four countries have formed an informal sub-regional group called BBIN. It has already formed a mechanism for discussing issues of connectivity, water, power and hydro-power. Myanmar is also included in another connectivity network: Bangladesh-China-India-Myanmar (BCIM) Forum for Regional Cooperation.

Such cooperation would be determined by perception of benefits that a riparian country would envisage. There is no denying that cooperative management of rivers holds out the real promise for greater sustainability, and productivity of the region's water resources, and potentially vulnerable environment. Moreover, the potential benefits of cooperative water resources management can serve as catalysts for broader regional cooperation, economic integration, and development -- and even conflict prevention. But riparians will pursue joint action only when they expect to receive greater benefits through cooperation than through unilateral action.

It is advisable that economic analysis can be used to make the case for cooperation on international rivers. This can help identify and measure the potential benefits of cooperation, determine the distribution of benefits among riparians. In all of these ways, economics can play an important role in enabling the management of international rivers, helping to motivate, design and implement cooperative water resources management.

Since Indian Prime Minister Narendra Modi's visit to Bangladesh in June 2015, there have been a number of developments which would enhance North-East's connectivity with rest of India. Bangladesh is opening new rail and road links as well as Land Customs Stations/Land Ports with North-East India and reviving the existing old ones. Both the countries are revamping trade infrastructures. Dhaka-Shillong-Guwahati and Kolkata-Dhaka-Agartala bus services have been flagged off. They are looking at direct air connectivity between Dhaka and Guwahati. Besides, under BBIN Motor Vehicles Agreement, new passenger bus and cargo services will be operational soon with a view to connecting Bangladesh and India with Nepal and Bhutan. This is expected to change the face of this sub-region.

All these initiatives, put together, would have an immense impact on increasing people-to-people contact as well as cross-border business activities. The region of South Asia, which is criss-crossed by rivers, could take advantage of the trans-boundary rivers for inter-country means of riverine transport. In a limited way, it is already taking place. The Indo-Bangladesh Protocol on Inland Water Transit and Trade (PIWTT) has been operational since 1972, by virtue of which Indian cargoes are transported by vessels from mainland to North-East India using Bangladesh's inland water ways.

Meanwhile, the PIWTT has been amended and Ashuganj has been declared a port of call and transshipment point. Under the transit/transshipment arrangement, Indian goods which are so far being transported along the Bangladesh-India Inland Water Protocol Routes (under PIWTT), would now be transshipped at Ashuganj from where those would be transported to Tripura by road through Akhaura-Agartala border check-post. The Bilateral Trade Agreement and the PIWTT have also been given long-term validity which is expected to attract more investment in this sector, thereby utilising the full potential of the inland waterways.

Both the countries are also looking at plying of passenger and cruise vessels on these protocol routes. An MoU for movement of passenger and cruise vessels on coastal shipping routes and Inland Water Protocol Routes is under discussion. The provision of doing third country trade under the renewed Bilateral Trade Agreement and the renewed PIWTT would not only enhance intra-regional connectivity but also open up new opportunities. The MoU on use of Chittagong and Mongla ports by India would further enhance connectivity not only bilaterally but also sub-regionally, when Nepal and Bhutan would be brought into the ambit.

Signing of the coastal shipping deal has opened up new avenues of connectivity and trade facilitation. This would substantially lower transportation cost and thus benefit consumers of the region. According to a World Bank report, one fundamental lesson of universal experience is that rivers are best managed as a basin unit. The Prime Ministers of Bangladesh and India in their Joint Declaration in June 2015 recalled Article 2 of the Framework Agreement on Cooperation for Development of 2011 and reiterated their commitment to address the issue of water resources management of common rivers, including water sharing, in a holistic manner through common basin management.

In fact to get the benefit from the rivers, we have to provide benefit to rivers as well. This would help accrue multiple benefits like dry season flow augmentation, increased irrigation and food production, hydro-power generation, flood management, increased fish production, increased navigational facility, resisting salinity intrusion, combating climate change impacts, improving water quality and over all environment of the basin. The prosperity of South Asia region depends largely on efficient management of trans-boundary water resources.

However, this needs cooperation from all co-riparian countries. Both India and Bangladesh may be examples of basin-wide management throughout the globe. It has already been mentioned that it has been some time now that Bangladesh is promoting the idea of basin-wide management at various levels of interactions with the riparian countries including at the BBIN forum. The researchers, academia, civil society organisations, grassroots level organisations et cetera must make use of their influence on policymakers through reports, analysis, data and actions.

Their efforts need to be supported by the various government constituencies that oversee security, development and diplomacy. The industry that will commercially be benefited by this should also join hands. Bangladesh hopes to seek the opportunity to look into all sectoral activities that it has ideated and also recommended as to how it can further coordinate and strengthen its cooperation to make its rivers sustainable and productive.

The writer is a retired Professor of Economics, BCS General Education Cadre.