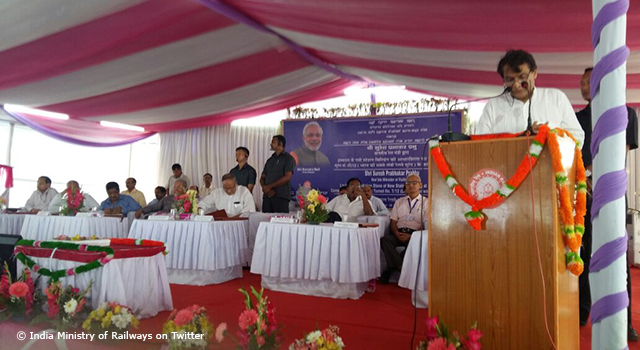 According to Mr. Prabhu, the Agartala-Akhaura international railway link is set to boost socio-economic development of India's mountainous northeast region. As a gateway to the eight northeastern states, it will connect Agartala with Ashuganj and Chittagong Port of Bangladesh, at a distance of 54 km and 213 km, respectively, and provide much shorter connectivity to Kolkata, at a distance of 514 km, reducing the 1,613-km mountainous route by over 1,000 km. This project is also part of the Trans-Asian Railway network.

Mr. Prabhu underscored the Government's plan to develop the railway network of the entire Northeastern India to develop its tourism, and include Bangladesh in the tourist circuit.

Tripura Chief Minister Manik Sarkar and members of his cabinet were present at the ceremony. A passenger train service linking Agartala to New Delhi was also flagged off by Minister Prabhu.

The $144.9 million Agartala-Akhaura railway line will have 5 stations and 9 level crossings, and involve construction of 15 bridges, including one major bridge. Scheduled date of completion is in 2017. The Government of India will fund the project.