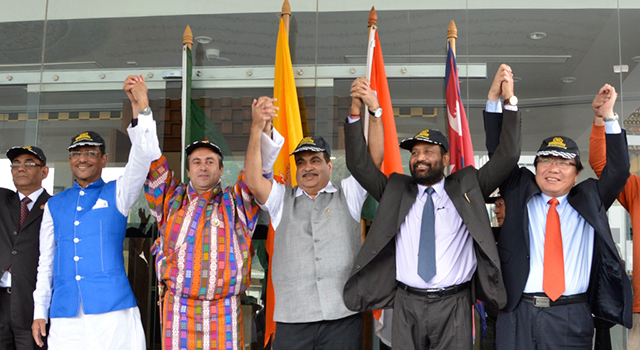 High hopes for BBIN vehicle agreement, one year on

The seamless movement of vehicles across borders in South Asia is getting ever closer.

A year ago today, transport ministers of Bangladesh, Bhutan, India, and Nepal signed the Motor Vehicles Agreement, a game-changing pact that set in motion steps to make it possible for both passenger vehicles and, perhaps more importantly, freight vehicles, to cross swiftly and easily from one country into another. The coming year should see huge progress in implementing that agreement.

South Asia is one of the least integrated subregions in Asia with countries trading more with nations elsewhere in Asia than with their neighbors. This is, in some part, because South Asia has fewer of the cross-border agreements – and less of the physical infrastructure – that ASEAN, for example, has. When vehicles can move easily across borders, transport costs fall, and goods become cheaper and easier to deliver. This, in turn, helps to develop more efficient supply chains and, along with it, spurs foreign direct investment, economic growth, and jobs.

The MVA implementation will help improve the efficiency of transport and trade facilitation in the subregion. This could potentially increase intraregional trade within South Asia by almost 60% and with the rest of the world by over 30% according to a World Bank study.

Certainly, as with all groundbreaking shifts, we still have some way to go. Bangladesh, India, and Nepal have already ratified the MVA, and we hope Bhutan will do so before the year-end. Encouragingly, to accelerate implementation, all four countries have started discussions on the protocols to operationalize the agreement.

Following three rounds of discussions in Dhaka and Kolkata last year and again in Dhaka in March this year, the four countries reached consensus on the movement of passenger vehicles. All countries understand the potential for greater tourism in a subregion where people share historical, cultural, and family ties and for other growing services such as medical treatment. The separate protocol for movement of cargo vehicles is still being discussed by individual countries.

Over time though, we expect the four countries to build on the agreement, allowing an ever-larger number of vehicles to cross and to ply an increasing number of better roads. We also anticipate that the MVA will enable better connectivity with other transport modes and gateways in the subregion, and ultimately to East Asia and Southeast Asia.

ADB, which has been supporting the development of the MVA through the South Asia Subregional Economic Cooperation (SASEC) program, is also helping to realize better physical infrastructure. In all, transport ministers of the four countries requested ADB to support over 30 priority road projects with a total estimated cost of over $8 billion, complementing the MVA implementation. In addition, the SASEC program is involved in customs modernization and other trade facilitation measures so that the time and cost of crossing spent borders is also cut.

Computer systems to allow electronic tracking and communications will help balance swifter movement with regulatory oversight as the MVA gets underway. Robust institutions such as land transport committees to oversee work within countries and to coordinate with their neighbors need to be set up and discussions are also underway on innovative provisions such as a Trusted Transport Operator program and the use of sovereign guarantees and insurance products as security to reduce transaction costs.

Private sector firms, notably transport operators, both within the region and outside it, have already shown keen interest in the new agreement. This has also been crucial in ensuring the protocols are designed to best suit business, with suggestions to allow trailers to cross the border, swap prime movers, mutual recognition of customs controls and to develop efficient models for multi-destination cargo and small shipments.

A trial run in November last year of a cargo vehicle from Kolkata in India to Agartala through Bangladesh was largely successful while providing practical suggestions on developing effective border-crossing procedures. More trial runs are expected to take place in coming months along other routes. Meanwhile, a Friendship Motor Rally organized by motor clubs in the region saw cars travel 4,500 kilometers around the region to test and showcase seamless travel.

A year from now, on the second anniversary of the signing of the Bangladesh-Bhutan-India-Nepal Motor Vehicle Agreement, we expect cross-border travel of both freight and passengers to be routine, paving the way for a more integrated and more prosperous South Asian region.