ADB Blog: Why We Should Be Happy When SASEC Customs Officials Talk More 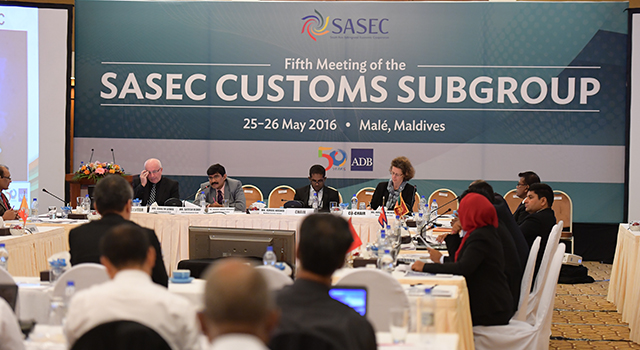 Why we should be happy when SASEC customs officials talk more

At the 5th meeting of the South Asia Subregional Economic Cooperation (SASEC) Customs Subgroup in the Maldives last month, officials agreed that more commodities will be added to the list and the value of the cargo able to use export declarations will be reduced, which will benefit smaller-scale traders and producers of seasonal goods. And more border crossings will be able to exchange export declarations as well.

Allowing exporting customs to exchange export declarations for commodities with the receiving importing customs on a daily basis leads to faster cross-verification of data such as declared value, quantity, classification, and so forth, facilitating trade.

It is clear that getting customs officials from the six countries of the SASEC program together reaps benefits. Encouragingly, another project of the SASEC Customs Subgroup has agreed that field-level customs officers should meet at least every six months to talk about and decide the next steps in improving cross-border coordination and cooperation.

Boosting trade between the SASEC countries would be a boon for all. Countries in the subregion trade amongst each other much less than they trade with countries outside South Asia, and much less than countries within other subregions. Access to more markets throughout the region provides opportunities for businesses to grow, create jobs and, ultimately, helps create international economic ties that can outweigh geopolitical differences.

Bottlenecks for trade at the borders are common, cumbersome, and expensive in much of South Asia. The number of import/export documents and the time it takes to complete them is high in the SASEC countries compared with global trends. It takes an average 60 hours and costs $345 to export a standard container in the region, and 112 hours and $569 to import. Time-consuming inspections and testing at borders delay cargo clearance, often meaning the loss of perishable goods like food and agricultural produce, and cause unnecessary congestion.

There has been some progress, certainly. And big changes are ahead too. Officials from India and Nepal at the Maldives meeting reported good progress in automating their customs systems to allow electronic sharing of customs transit data between the two countries. They expect to test this system by end 2016. Making sure that each checkpoint along the route taken by the cargo receives the data electronically means truck drivers waste less time waiting for often numerous documents to be processed in several offices. This automated data sharing is likely to be extended to Bhutan as well.

India and Bangladesh also plan to pilot the electronic exchange of data between their respective customs administrations. This means, among other things, they can ensure that cargoes declared for export are the same as the goods that are actually imported on the other side of the border. This increased transparency will ensure the right tariffs are charged and give customs officials more time to target potentially illicit cargoes.

Easier customs procedures means that countries will be well placed to make the most of the landmark Motor Vehicles Agreement between Bangladesh, Bhutan, India, and Nepal, as it is gradually operationalized over the coming months. That agreement will allow a specific number of passenger and freight vehicles to travel even more easily between countries along certain routes.

In addition to these bilateral and multi-country projects, the six countries of the SASEC Customs Subgroup are also working on 20 national projects that include improving IT connectivity and capacity, including for land customs stations; accession to the revised Kyoto Convention (the international blueprint standard for modern and efficient Customs procedure); risk management and post clearance audit; and the establishment of national single windows in the SASEC subregion.

These national projects are supported by ADB training in areas such as customs valuation, risk management, trusted traders programs, national single window, and post clearance audit. And later this year, the subgroup will meet to learn more about customs-related international standards and conventions, so that they are better informed in deciding which of these agreements they should prioritize for accession.

As this Customs Subgroup keeps talking, more coordination and cooperation at the borders will create greater efficiencies that are passed on to traders so business becomes faster and cheaper – a cross-border win-win situation for all.