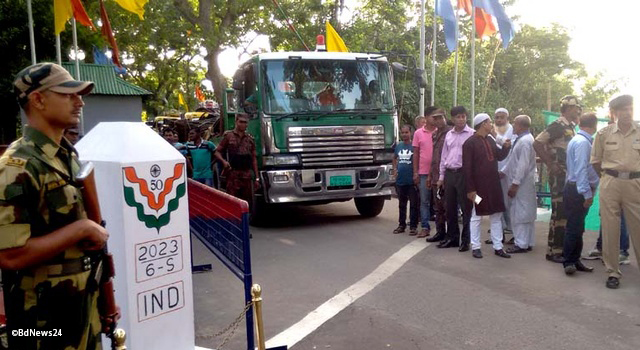 Launch of the Bangladesh-India transshipment facility—which began from Ashuganj river port in Bangladesh on 16 June 2016—concluded with the successful delivery of steel rods from Kolkata, India to Agartala, the capital of Tripura, through Akhaura land port in Bangladesh, onboard Bangladeshi trucks on 19 June 2016.

India had long been seeking transit and transshipment facility to carry goods to Arunachal Pradesh, Assam, Manipur, Meghalaya, Mizoram, Nagaland and Tripura, from West Bengal through a shortened route via Bangladesh. At present, trucks from Kolkata travel around 1,600 kilometres to reach Agartala. The distance through Bangladesh reduces transit time to around 500 km, according to transport experts.

The facility, which combines riverine and land routes, enables India to deliver goods to its northeast region in an estimated 10-day time, reducing transport cost by nearly 50%. Indian traders will pay taxes for the use of Bangladeshi territory to transport goods, according to Mr. Sishir Dey, Customs Superintendent at Integrated Check Post in Agartala.

Indian High Commissioner in Dhaka Harsh Vardhan Shringla noted that India will be investing in infrastructure in Ashuganj and Akhaura to facilitate smooth movement of goods. Under the second line of credit extended by India to Bangladesh, projects to be implemented include a river port to handle container, bulk and trade cargo, and upgrading of a 51-km road into a four-lane road. The Government of India also sanctioned upgrading of the Akhaura-Agartala rail link.

Bangladesh and India agreed to allow each other to use their territories for transiting goods to a third country under the revised Inland Water Transit and Trade signed during India Prime Minister Narendra Modi's visit to Dhaka in June 2015.

The facility will also help boost trade in the region by enabling Bangladesh to use Indian territory to transport goods to Nepal and Bhutan, and giving India access to Myanmar through Bangladesh.