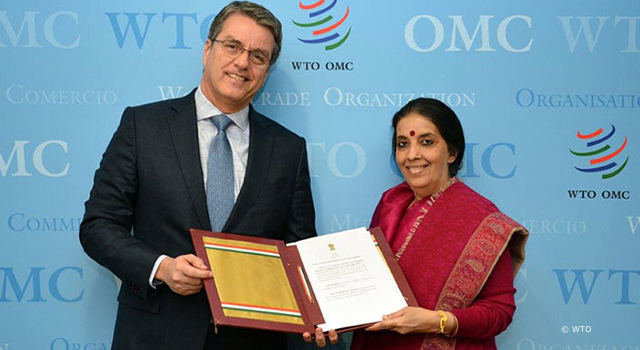 India is the 76th WTO member to accept the Agreement, which will enter into force once two-thirds of WTO's 162 members have formally accepted.

On 18 March 2016, India submitted its Category A notification to the WTO, which indicates provisions of the TFA it intends to implement upon entry into force of the Agreement.

Ms. Nirmala Sitharaman, Commerce Minister, India described the Cabinet's decision to ratify the WTO TFA as a 'very important step' in February 2016. In a recent statement, she related how this move supplements India’s ongoing reforms to bring in simplification and enhanced transparency in cross-border trade in goods.

Concluded at the WTO 2013 Bali Ministerial Conference, the TFA contains provisions for expediting the movement, release and clearance of goods, including goods in transit. It also sets out measures for effective cooperation between Customs and other appropriate authorities on trade facilitation and customs compliance issues. It further contains provisions for technical assistance and capacity building in this area.