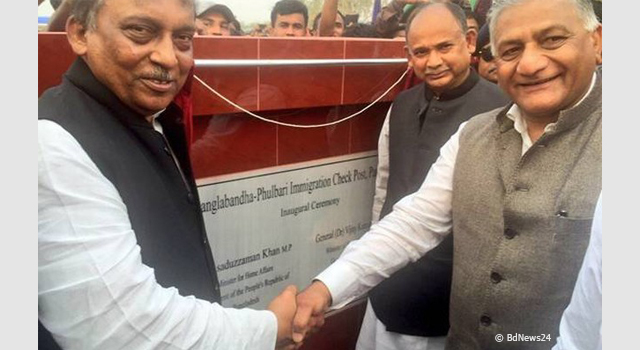 An immigration facility in the Banglabandha-Phulbari Land Port between Bangladesh and India was jointly inaugurated on 18 February 2016 by Bangladesh Home Affairs Minister Asaduzzaman Khan and Indian External Affairs Minister of State of V.K. Singh. This facility is expected to ease people-to-people connectivity between the two countries.

Strategically located on the Asian Highway, this Bangladesh-India land port and immigration facility is around 8 kilometers from Siliguri, in India's West Bengal. Its unique location makes it a gateway to India's North East region, and brings Bhutan and Nepal border points closer. The Banglabandha-Phulbari border crossing was inaugurated as a land port in January 2011.

According to Bangladesh Home Affairs Minister Khan, its location will facilitate Bangladesh's trade and commerce not only with India, but with other neighboring countries.

Indian External Affairs Minister of State of Singh said development of the facility shows keenness by the Governments of both countries to boost their bilateral relationship.

The Banglabandha-Phulbari border crossing was inaugurated as a land port in January 2011.