Bhutan's Accession to the WTO Discussed 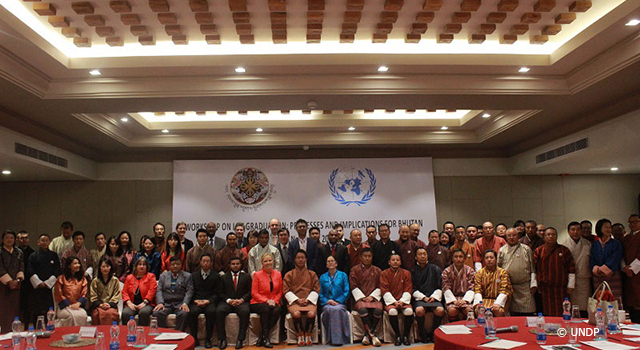 Accession to the World Trade Organization (WTO) was discussed during a workshop on Bhutan's graduation from least developed country (LDC) status, held on 17-18 November 2015 in Thimphu, organized by the Government of Bhutan in partnership with the United Nations’ Development Programme (UNDP), Conference on Trade And Development (UNCTAD), Department of Economic and Social Affairs (UN-DESA), Economic and Social Council for Asia and Pacific (UNESCAP), and Office of the High Representative for the Least Developed Countries, Landlocked Developing Countries and the Small Island Developing States (UN-OHRLLS).

The Workshop discussed how membership to the WTO will benefit Bhutan, including enjoying the benefits of a multilateral trading system with WTO member countries as a most favored nation, and clarified wider implications of WTO membership, including:

According to expert recommendations, for Bhutan to fully maximize the market access it will gain upon entry into the WTO, the country will need to enhance and diversify its exports and lower trade-related transport costs.

UN experts during the Workshop also clarified the notion that Bhutan will lose LDC privileges owing to its graduation, emphasizing that the recently-adopted Sustainable Development Goals would support Bhutan's transition.