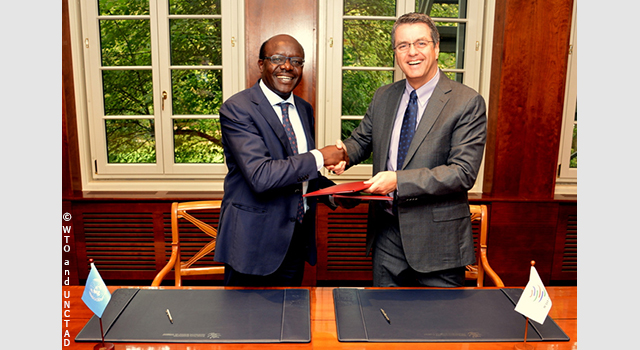 The World Trade Organization (WTO) and the United Nations Conference on Trade and Development (UNCTAD), represented by WTO Director-General Roberto Azevêdo and UNCTAD Secretary-General Mukhisa Kituyi, signed a Joint Declaration on 12 October 2015 that reaffirms their commitment to strengthen cooperation on promoting trade as a tool for development.

Director-General Azevêdo highlighted the common goal of both organizations in helping developing countries, especially the least-developed countries (LDCs), integrate into the global economy, while UNCTAD Secretary-General Kituyi called the move toward closer collaboration between UNCTAD and the WTO “an important step” if LDCs are to reach a 2% share of world trade by 2020.

The Joint Declaration acknowledges trade as an important driver of development and reiterates the importance of reaching concrete and substantive development outcomes at their upcoming meetings – WTO's 10th Ministerial Conference on December 2015 and UNCTAD's Fourteenth Session in 2016. It also reinforces the commitment of WTO and UNCTAD to bolster cooperation in key areas of their work, including trade related technical assistance and capacity-building, trade facilitation, global value chain, standards, non-tariff measures, research in trade and development, trade and investment, assistance to LDCs, electronic commerce, commodities, and the UN's Sustainable Development Goals.

The signing ceremony took place at the WTO Headquarters in Geneva, prior to the start of an event commemorating WTO's 20th anniversary, which discussed what has been achieved so far in helping integrate LDCs into the multilateral trading system and what WTO Members can aim to achieve in the future.