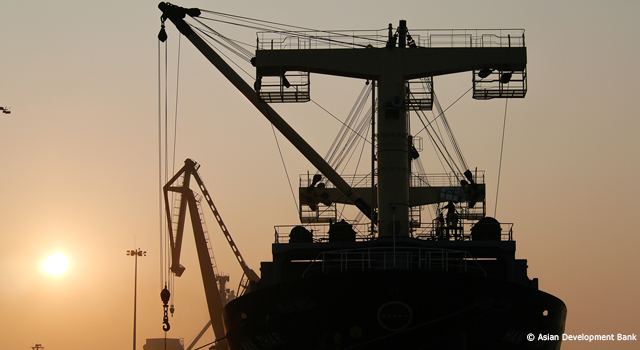 Countries of South Asia and Southeast Asia are experiencing steady growth and forging stronger economic ties, reports a 2015 Asian Development Outlook Update. However, although cross-subregional trade has increased from $4 billion to $90 billion over two decades, regional integration between the two subregions remains relatively limited, hindered by various problems, including bottlenecks in transport infrastructure.

An Asian Development Bank (ADB) Brief published in September 2015, and which builds on flagship research by ADB and ADB Institute, highlights the critical role of transport infrastructure in bridging the two regions. Enhancements in road, railways, and sea port infrastructure, and building new road and rail links between Bangladesh, India, Myanmar, and Thailand—the key land connections between the two regions—will lower unit transport costs, reduce shipping times, and increase the quantity of goods, all of which will lead to increased trade.

The Brief also maps details of economic corridors and highways, railroads, and seaports, focusing on key sections of the Asian Highway Network and the Trans-Asian Railway, and ports on the Bay of Bengal. It identifies priority transport investment projects to link the two subregions.

Key findings of the Brief include the following:

Recommendations from the Brief emphasize that road and port projects should receive high priority: a modest investment of $986 million in road transport will properly link South Asia and Southeast Asia, and would have huge impact on trade. Likewise, although port costs may be high (estimated at $2.3 billion), they are necessary as the bulk of trade still relies on maritime transport.

The estimated potential benefit of reduced transport costs between the two regions ranges from $89 billion to $358 billion over the next decade, a conservative estimate that shows how investment in infrastructure can pay huge dividends in the medium and long term.

In financing infrastructure to promote integration in the region, public-private partnerships play an important part, as well as multilateral and regional financiers that can play a useful role as honest brokers in coordinating regional projects and providing crucial finance and technical expertise.