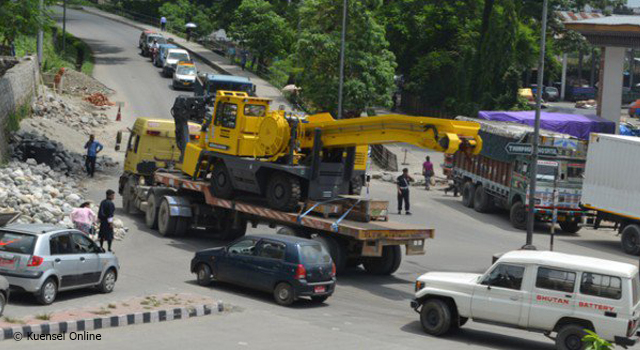 Construction to improve Pasakha Access Road in Phuentsholing, Bhutan will start in September, said officials from Bhutan's Department of Roads, Ministry of Works and Human Settlement (MOWHS). This road section—a key output of the SASEC Road Connectivity Project in Bhutan—will access a bypass road from Bibarey near Manglabarey, providing trucks and other vehicles an alternate route to industrial sites in Pasakha. Once constructed, it is expected to decongest traffic in Bhutan's Phuentsholing and India's Jaigaon.

MOWHS awarded the contract to build the 1.2-kilometer access road to the Gaseb-SPML-Macaferi joint venture. Alongside the access road, this joint venture will also build two major bridges: a 120-meter bridge at Bhalujhora, which will allow heavy load trucks to pass through, and a 50-meter reinforced cement concrete bridge in Pasakha under the SASEC project. They will also conduct slope stabilization and river training works. This commission is scheduled to be completed by September 2017.

Bhutan's SASEC Road Connectivity Project will also support construction of the northern bypass road around Phuentsholing, along with a mini-dry port and a land Customs station. The Phuentsholing Thromde who will implement this component of the project has commissioned the joint venture Gyeltshen Consultancy and SMEC International Private Limited. Project coordinator for Phuentsholing Thromde, Mr. D.C. Dhimal, said that detailed design, drawing, and procurement works have been finalized, and work is set to begin soon.

The Asian Development Bank (ADB) is committed to development of Bhutan's transport sector. Under the ADB-financed SASEC Program, the $69 million SASEC Road Connectivity Project, approved in July 2014, will expand Bhutan's national road network and bring economic opportunities to poorer communities. It is expected to contribute to reduce costs and time of road transport, and also ease the severe traffic congestion in Phuentsholing, through which more than 80% of Bhutan’s cross-border trade passes. Additional direct benefits include opening up access for remote villages to economic opportunity and social services.