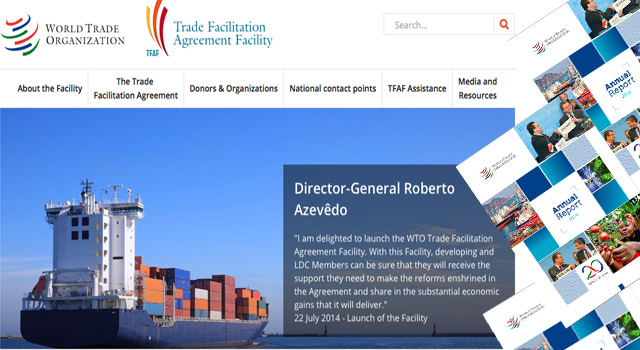 The TFAF website provides background on the WTO Trade Facilitation Agreement (TFA) and TFAF, information on programs that support implementation of the TFA, and national contact points for trade facilitation in developing and LDC member countries. It contains further information on TFAF support related to Categories A, B, and C commitments; assistance and support for capacity building; and applications for TFAF grants where no funding sources are available to developing and LDC countries for implementation.

The TFA broke new ground for the first time in WTO history with the requirement that its implementation is directly linked to country capacity. It further states in the TFA that assistance and support should be provided to help countries achieve that capacity. Currently, five WTO members have secured domestic acceptance of the TFA but two-thirds of the WTO’s 161 members will need to ratify the TFA in order for it to enter into force.

The WTO also published its Annual Report on 27 May 2015, which details WTO areas of activity, including trade negotiations and trade capacity building.