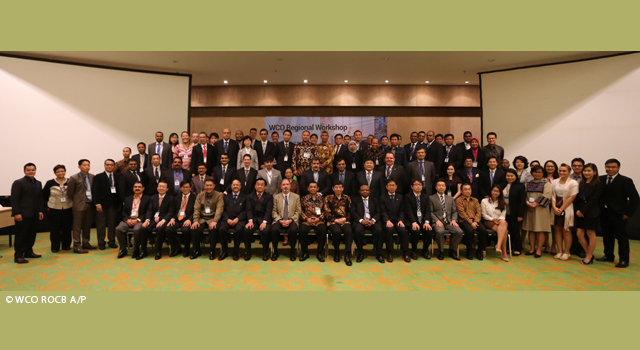 Workshop participants included senior trade and Customs officials from across Asia and the Pacific, together with development partners including the Asian Development Bank (ADB).

Overview of TFA Implementation
The Trade Facilitation Agreement—approved by the WTO during its Ninth Ministerial Conference in 2013 and adopted into the WTO Agreement on 27 November 2014 by WTO members—involves the simplification, harmonization, and automation of procedures related to international trade, with the aim of expediting the movement, release and clearance of goods, including goods in transit. Sessions on day 1 discussed (i) the aims of WTO TFA, its brief history, structure, and WTO's next steps; (ii) role of WCO in TFA implementation; and (iii) priority areas in the programs and activities of international and regional organizations that support trade facilitation, such as APEC, ASEAN, and UNESCAP.

The Mercator Programme
Sessions on day 2 focused on the WCO's Mercator Programme. Adopted by the WCO as a strategic initiative to support the implementation of trade facilitation, it builds on the strengths of WCO in standard setting for Customs by delivering training and technical assistance and building cooperation among a network of accredited experts from Customs administrations, international organizations, and other agencies. Representatives from development partners, including ADB and the Customs Cooperation Fund (CCF) of Japan, Korea, and China discussed their domestic, regional and international assistance programs, as well as mechanisms to access assistance and support.

The SASEC Trade Facilitation Program—which promotes the RKC and SAFE framework, and was designed to be implemented in cooperation with WCO—is an example of ADB support for trade facilitation implemented in conjunction with improvements in regional road infrastructure, including SASEC Regional Connectivity Projects in Bangladesh, Bhutan, India and Nepal.

Customs Cooperation among Government Agencies
Day 3 addressed cooperation among government agencies through WCO's Coordinated Border Management (CBM) initiative. CBM aims to facilitate faster and more efficient trade among WTO members by promoting cooperation among authorities and agencies responsible for border controls, and coordinating activities of agencies dealing with procedures related to import, export and transit of goods. Various Customs agencies shared their experiences relating to cross-border cooperation. Examples included the Indonesian Agricultural Quarantine Agency's experience in preventing harmful cross-border agricultural transits by applying WCO's sanitary/phytosanitary measures, and the experience of Japan Customs in periodically conducting Time Release Studies. A representative from Sri Lanka Customs shared details of its National Trade Facilitation Committee (NTFC), including selection of members, accomplishments to date, and its role in facilitating TFA implementation in Sri Lanka. The WCO actively supports the establishment and maintenance of TFA NTFCs among its members. To date, 23 members have either established an NTFC or designated an existing body to carry out this role.

The WTO TFA will enter into force once two-thirds of WTO Members have accepted the protocol of amendment. Four members—Hong Kong, China; Singapore; the United States; and Mauritius—have ratified the WTO TFA. WTO has 160 members.

The Workshop was organized by WCO, in partnership with its Regional Office for Capacity Building Asia Pacific and Indonesian Customs. It was co-sponsored by ADB and CCF Japan.