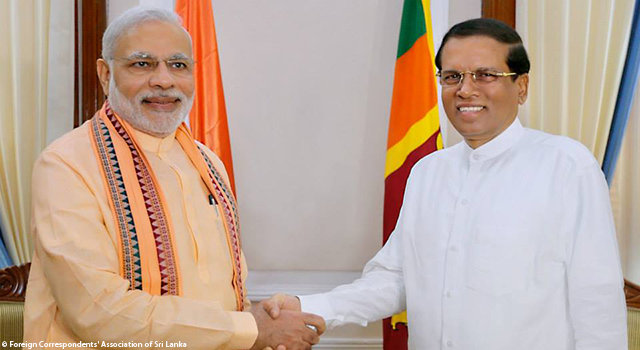 Prime Minister of India Narendra Modi addressed the Sri Lankan Parliament on 13 March 2015 as part of his 2-day visit to the country. He spoke of strong geographic and cultural links between India and Sri Lanka, and encouraged Sri Lanka to tap the potential to become India's strongest economic partner.

Prime Minister Modi is the first Indian prime minister to visit the country in 28 years. During the visit, he enjoined Sri Lanka to partner with India in taking the lead to increase cooperation in the South Asian region and the linked BIMSTEC region. “Connecting this vast region by land and sea, our two countries can become engines of regional prosperity,” said Prime Minister Modi.

Reflecting his vision of an ideal neighborhood—one where “trade, investments, technology, ideas and people flow easily across borders; when partnerships in the region are formed with the ease of routine”—Prime Minister Modi signed four agreements with recently-elected Sri Lanka President Maithripala Sirisena. One of these is the Customs Cooperation Agreement that aims to balance the trade deficit between the two countries by breaking down barriers to facilitate easy and speedy trade.

Speaking to Sri Lanka's business community, Prime Minister Modi assured them that he will address issues concerning India-Sri Lanka trade, and expressed optimism that bilateral trade will grow exponentially in the coming years as both countries forge healthy cooperation and explore new opportunities for trade and investment.

Other signed agreements include easing of visa regulations for Sri Lankans visiting India, beginning 14 April; assistance for youth development; and Indian support to build an auditorium at the University of Ruhuna in southern Sri Lanka.

During his visit, Prime Minister Modi and President Sirisena also flagged off a train service at Talaimannar, northwest of Sri Lanka, near India. The newly-constructed 63-kilometer railway track completed by IRCON International Ltd, a Government of India owned company, is the last segment of the 265-km long Northern Railway Line Reconstruction Project.

He also announced an additional credit line of up to $318 million to develop Sri Lanka's railway sector, and a currency swap agreement to help stabilize the Sri Lankan currency.