Toward a South Asian Economic Union for the Region's Development 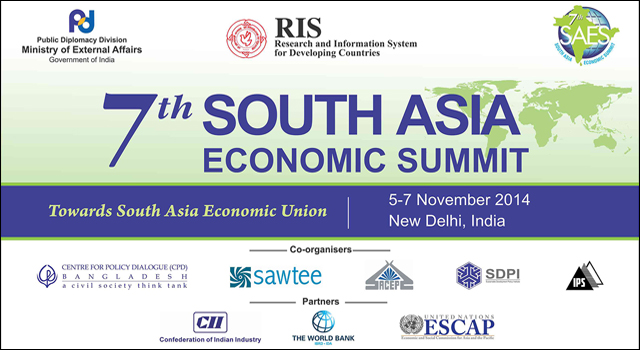 Representatives of the eight South Asian Association for Regional Cooperation (SAARC) member countries, including ministers and strategic experts, gathered on 5-7 November 2014 for the 7th South Asia Economic Summit (SAES) to discuss an economic roadmap for greater integration of the South Asia region.

During the Summit, India's Vice President, Mr. Hamid Ansari, expressed support for the creation of a South Asian Economic Union (SAEU) to boost regional cooperation efforts. According to Vice President Ansari, SAARC must consider the mutual benefits of greater economic integration, and collectively address the challenges of working toward regional integration.

He also emphasized that while regional economic policy coordination would be highlighted in SAEU, investments in regional infrastructure—including transport connectivity and regional trade facilitation initiatives such as coordinated border management and a regional single window—should also be given priority, since facilitating ease of travel and trade will support the realization of an economically integrated South Asia.

Though South Asia has been gaining economic momentum in recent years, it remains one of the least integrated subregions in Asia, with intra-regional trade share in 2008 accounting for only 5.5%. Increasing regional cooperation in South Asia and improving regional connectivity—opening access to markets, goods, and services across borders—will enable inclusive growth.

The Asian Development Bank, through the technical assistance Support for South Asia Regional Economic Cooperation and upon the request of the SAARC Secretariat, supports a Study on Regional Economic Integration (REI) among SAARC member countries. Phase I of the SAARC REI examined the extent of South Asian integration and proposed recommendations for its further deepening through four pillars of market integration, cross-border connectivity, energy cooperation and private sector liberalization. Phase II of the REI outlines a roadmap toward achieving an SAEU.

According to the Executive Summary of the SAEU, although non-tariff barriers, infrastructure constraints and other factors continue to hamper regional cooperation and integration in South Asia, reference by SAARC leaders toward achieving an SAEU—through a phased and planned process for the region—indicates a willingness to consider bold action.

The 7th South Asia Economic Summit was organized by Research and Information System for Developing Countries (RIS), with support from the Ministry of External Affairs of the Government of India, and organizations including UNESCAP and World Bank.