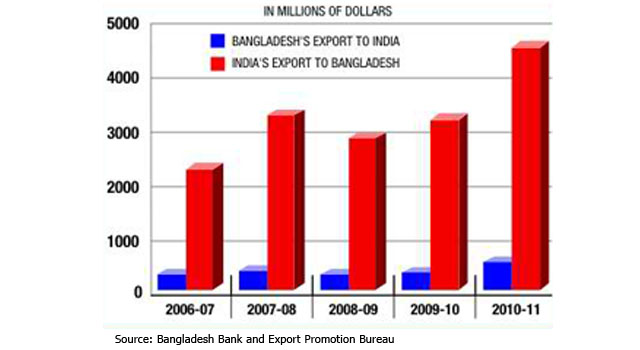 In recent decades, Bangladesh has emerged as one of the largest export markets for India in the South Asian Association for Regional Cooperation region. From 1988-1989 to 1992-1993, India’s total exports increased by 164%, while the increase in imports to Bangladesh was 293%.

Meanwhile, Bangladesh’s exports to India are a very small percentage of its imports from India. Its traditional exports include raw jute, fish, fertilizer, apparel, leather products, cement, plastics, prepared foodstuff and beverages. While Bangladesh’s global export is mostly titled towards ready-made garments (80% of total export), it accounts for only 10% of exports to India.

Bangladesh’s largest current trade deficit is with China. In 2008, trade imbalance with India was $2.8 billion, while it reached $3.8 billion with China. Bangladesh’s large trade imbalance with India can affect future trade flows between the two countries. The challenge is for Bangladesh to explore opportunities in India’s growing import market and further grow its share of exports so the bilateral trade deficit can be significantly reduced.