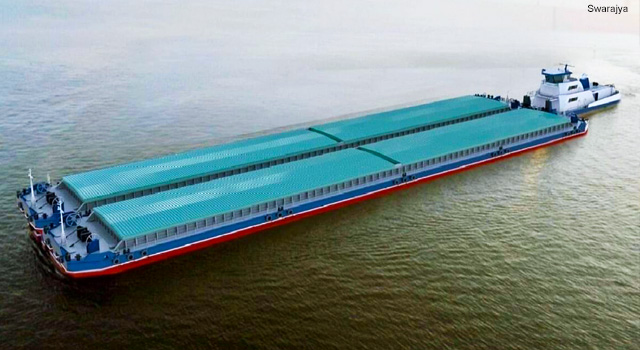 Highlighting new opportunities in waterways between India and Bangladesh, the Government of India has said that waterway transport is faster, cheaper, and environment-friendly. This post appears on Swarajya.

Highlighting the new opportunities in waterways between India and Bangladesh, the Government of India has said that waterway transport is faster, cheaper and environment-friendly. Addressing senior members and industry stakeholders at the summit on "Waterways—Connecting People—India & Bangladesh," Mr. Sanjeev Ranjan, Ports, Shipping and Waterways Secretary, Government of India, said that waterways turn out to be sustainable and more eco-friendly than other modes of transport.

Mr. Ranjan urged industry members to harness existing opportunities to reduce the cost of transaction and trade between India and Bangladesh as both are emerging as major trading partners.

Inland Waterways Authority of India chair Mr. Sanjay Bandoupadhayay said that India has a total 20,000 kilometers (km) of waterways, out of which 14,500 km is navigable.

India has 19 operational waterways for cargo movement and 25 for passengers. He also said that the revival of historical river linkages between India and Bangladesh are also in line. All these developments will lead to immense trade opportunities between both countries. The main objective is to improve the regional trade potential through inland waterways in Southeast Asian countries, said Mr. Bandoupadhayay.

Commodore Golam Sadeq, chair, Bangladesh Inland Water Transport Authority, said that India and Bangladesh are natural partners. He said that there are immense opportunities in the maritime sector and a lot has already been done to promote smoother trade with India.

Trade volume has increased since 2001 and is projected to increase further. One of the main areas of focus is providing cruise facilities to promote tourism between both countries, said Mr. Sadeq.

India's modal share of freight moved on inland waterways has significant potential to improve compared to other best in class benchmarks. It is imperative to increase the share of the country’s inland waterways as they are highly economical and an eco-friendly mode of transport.

Steps are being undertaken to reduce logistics expenses and further reduce the transit time between India and Bangladesh by 67%.

According to the data, 8,480 km of Bangladesh waterways are navigable and could be used for transportation and distribution of goods between Bangladesh, India, Nepal, and Bhutan, which could anchor robust business relations through the optimal and holistic development of the ecosystem of waterways.

Regular movement of cargo through waterways will also create job opportunities and open the international market for local products through cost-effective transport.

With the accessibility of inland waterways transport, trade between India and Bangladesh is expected to increase and generate more traffic growth on the national waterways.