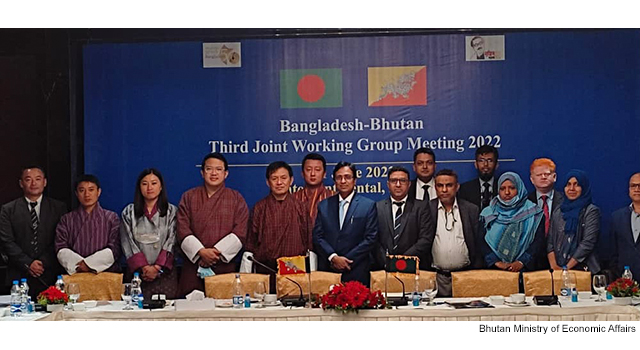 The meeting on 1 June for the Third Joint Working Group Meeting on the Agreement on the Movement of Traffic (Goods) in Transit finalized the text of the agreement and protocols. Ratification of this agreement by both countries will allow movement of goods in transit for Bhutan’s imports and exports through Bangladesh, including exiting through the sea ports of Chattogram, Mongla. The delegations were led by Mr. Md. Abdus Samad Al Azad, Joint Secretary, Ministry of Commerce of the Government of Bangladesh, and Mr. Sonam Tenzin, Director General, Department of Trade of the Government of Bhutan.

On 2 June 2022, delegations led by Mr. A.T.M Monemul Haque, Joint Secretary, Ministry of Shipping of the Government of Bangladesh, and Mr. Tenzin held the 2nd Joint Committee meeting towards the amendment of the SOP for the MoU on the Use of Inland Waterways between Bangladesh and Bhutan. The meeting agreed to add designated Bangladesh ports of call for use by Bhutan. The new ports of call will be revised to include Aricha, Chilmari, Sirajganj, Mongla, Chattogram and Payra Port.

The revision in the ports of call will be formalized upon the signing of the revised SOP between the two countries.

Mr. Tenzin said that Bhutan only has one port of call in Narayanganji in Dhaka. The revised SOP will provide the flexibility to have numerous places, especially along the Brahmaputra basin, before reaching the Bay of Bengal to unload boulder exports and make many trips.

The new ports of call are set to provide alternative export and import transit routes and modes of transportation for the private sector.

Bangladesh agrees to designate new ports of call for Bhutan

Bangladesh will allow Bhutan to use six more ports