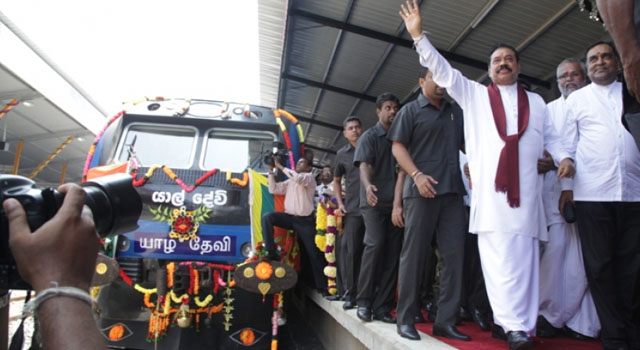 Sri Lankan President Mahinda Rajapaksa marked the completion of the 38 km long Pallai-Jaffna railway line under the Indian credit line of $800 million last 13 October 2014. The reconstruction of this Northern Railway line by IRCON International Ltd, a public sector enterprise under the Government of India, links Sri Lanka’s Northern Province to Colombo. This first train to Jaffna in 24 years is expected to enhance connectivity not only within the Northern Province but also between India and Sri Lanka.

The segments already completed under this project include the Medawchchiya-Madhu road, together with Omanthai- Kilinochchi, and Kilinochchi-Pallai. Simultaneous work is ongoing with the Madhu Road-Thalaimannar and Jaffna-Kankasanthurai sections, along with installations of a new signal, safety, and telecommunications systems. The Jaffna railway station has also been renovated with assistance from the Bank of Ceylon. The reconstruction of the railway line further holds special significance because the Yal Devi Express would resume services to Jaffna, and reconnect Jaffna to Colombo by rail.

A pier will be built at Thalaimannar as part of this project to resume ferry services between Rameshwaram and Thalaimannar. This will enable Sri Lankans to travel by train from Hambantota and Matara to Bodhgaya, and also to Jammu and Kashmir in North India, Gujarat in the West, Assam and the North-eastern states in the East.

India's High Commissioner in Colombo, Y.K. Sinha, who accompanied President Mahinda Rajapaksa during the ceremony in Jaffna remarked, “the operationalisation of the Northern line would restore connectivity not only within the Northern Province, but also with the rest of the country, thereby promoting development, reconciliation, and greater integration by bringing people in different parts of the island closer.”