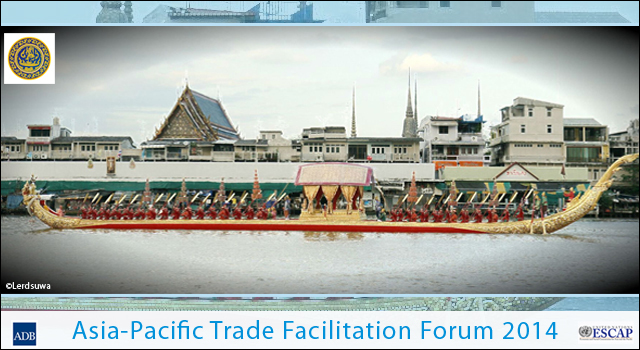 The Asian Development Bank (ADB), United Nations Economic and Social Commission for Asia and the Pacific (UNESCAP), in collaboration with the Ministry of Commerce of Thailand, jointly organized the 6th Asia-Pacific Trade Facilitation Forum (APTFF)—an annual regional platform—on September 24-25, 2014. Over 200 delegates from governments across Asia Pacific, the private sector, scholars and researchers from universities and think-tanks, and experts from international organizations joined the knowledge and experience-sharing forum, which aimed to inspire trade facilitation reform.

In his opening speech, Mr. Arjun Goswami, Director, Office of Regional Economic Integration, ADB emphasized that trade facilitation reforms are imperative in expanding the scope of those who gain from trade-led economic growth. Removal of barriers to trade and creation of necessary reforms could encourage export participation among SMEs in Asia, which account for over 90% of all businesses in the region, yet whose participation in trade exports counts for only about 30%. Mr. Goswami also stressed the importance of monitoring trade facilitation performance, cooperation and collaboration across borders, and the need to enhance capacity in facilitating trade on a global scale through the WTO TFA.