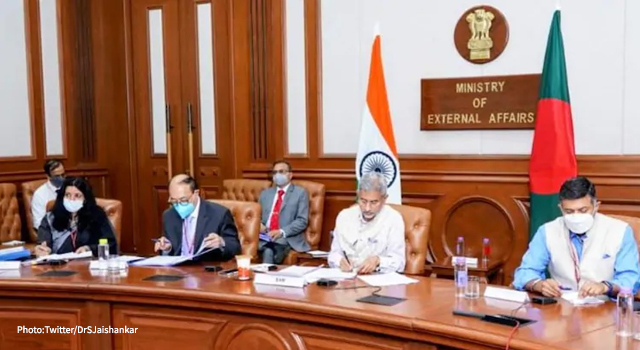 The sixth meeting of the India-Bangladesh Joint Consultative Commission held virtually on 29 September 2020 recommended taking greater measures to mutually enhance trade and investment between the two countries. Recommendations include removal of all forms of barriers to trade, and harmonization of standards and mutual recognition of certificates—important elements of trade facilitation.

Dr. A. K. Abdul Momen, Foreign Minister of Bangladesh and Dr. S. Jaishankar, External Affairs Minister of India, who co-chaired the meeting, tasked their officials to work together closely to avoid disruption of supply chains. They also noted transport priorities to ensure unhindered trade flow, including (i) resumption of two-way trade through the land ports, and (ii) optimizing use of the four trans-border railway connections and inland and coastal waterways.

Other matters discussed in the meeting include:

The meeting also expressed satisfaction over the two countries’ current state of bilateral relations. They noted the remarkable progress in the implementation of various decisions taken during the last JCC meeting held in New Delhi in February 2019, and the visit of Prime Minister Sheikh Hasina to New Delhi in October 2019.

The Ministers expressed satisfaction over the sustained engagement between the two countries amidst the health crisis, leading to success in the following initiatives:

Foreign Minister Momen reiterated Bangladesh’s commitment to support India in strengthening connectivity in the region to create a win-win situation for both economies.

The meeting also noted the increased importance of leveraging the resources of the South Asian Association for Regional Cooperation (SAARC) and the Bay of Bengal Initiative for Multi-Sectoral Technical and Economic Cooperation (BIMSTEC) given the regional and global economic scenarios following the outbreak of the coronavirus disease (COVID-19) pandemic.

More aspects of bilateral relations were discussed in the meeting. Read the full Joint Statement.