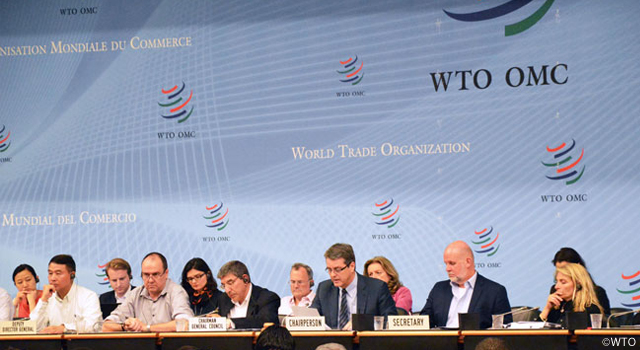 The deadline for adoption of the World Trade Organization’s (WTO) Trade Facilitation Agreement (TFA) passed on 31 July without reaching a consensus. Speaking to Heads of Delegation at an informal meeting hours before midnight, WTO Director General Roberto Azevêdo reports "the remaining gaps are unbridgeable with the time that we have."

During the month prior to the agreed deadline, the WTO had attempted to work out convergence between, on the one hand, upholding the decision made in the 9th Ministerial Conference in Bali to bring the TFA into the organization’s legal framework by 31 July, and addressing unresolved concerns about food security before the adoption of the Bali package, on the other. Yet, while WTO held several discussions and reached out to several delegations and capitals—its efforts to generate ideas that would enable the General Council to ratify the Protocol of Amendment intensifying as the deadline approached—the WTO "got closer — significantly closer — but not quite there."

Ahead of the conference, India, along with other least developed countries (LDCs), questioned the implementation of the global customs pact at the appointed time, remaining firm that, unless parallel changes were made on measures concerning stockpiling of food grains, it would veto the agreement. WTO currently sets the value of food subsidies to 10% of the total value of food grain production in current norms—India is lobbying to revise the base year (1986-1988) for calculating the food subsidies and asking for inclusion of account inflation and currency fluctuation. Negotiation of these measures will have direct consequences on its food security program.

While the deal is at a standstill, India Commerce Secretary Rajeev Kher, speaking to Press Trust of India, insisted that India remains committed to the TFA pact. This August, while WTO is on a month-long hiatus, India will focus on drawing a follow-up action to find a permanent solution to its questions on food security. Special sessions for negotiations are also scheduled in September, and a new deadline of 31 December for TFA adoption has been recommended.

The prospect of missing the TFA deadline has prompted both WTO members and the broader trade community to speculate on the wider ramifications for resolving the remaining elements of the Doha Round trade talks.

Earlier in July, WTO launched a Trade Facilitation Agreement Facility to further ensure that LDCs and developing countries will receive necessary assistance in implementing the TFA. The Facility will open its doors once the Protocol of Amendment inserting the TFA into the WTO is adopted.