Energy demand in the SASEC subregion is expected to increase over the next decade resulting from economic growth and rising per capita incomes and energy consumption. With energy resources in South Asia unevenly spread, regional energy cooperation could help countries develop their energy resources in an optimal manner to lower energy costs, improve regional energy security, and contribute to climate change mitigation. SASEC initiatives in the energy sector support improvement of energy trade infrastructure, developing a regional power market by harmonizing legal and regulatory frameworks, and developing low-carbon alternatives and conservation and energy efficiency measures.

This publication highlights good practices and lessons learned from Asian Development Bank projects in energy, which comprised 26.5% of ADB's total lending commitments from 2008 to 2014. It discusses how the region's energy sources are utilized, providing updates on recent developments and challenges, highlighting the need for sustainable energy initiatives. Featured projects include the Green Power Development Project in Bhutan, which developed clean energy for regional use and promoted cross-border power trade. As the first infrastructure-focused public-private partnership in Bhutan, it also illustrated how projects can benefit with the active participation of the private sector, foreign parties, and commercial and public financial institutions. Also featured is the Bangladesh-India Electrical Grid Interconnection Project, which reduced Bangladesh's energy deficiency by enabling the country to affordably import 500 megawatts of electricity from India. This electrical link laid the groundwork for a regional energy market, an important step toward achieving a functioning regional electricity network in South Asia.

Together We Deliver: 10 Stories from ADB-Supported Projects

Together We Deliver showcases ten ADB projects across Asia and the Pacific that demonstrate clear development impacts, replicable best practices, and valuable use of innovation. Among those highlighted is SASEC's Green Power Development Project in Bhutan, which is boosting the national economy through clean energy exports to India and also funding social programs that bring electricity to more than 8,500 rural poor households. The book also features a rural road project in India that connects remote communities to schools, hospitals, and other facilities. Capturing a wide range of ADB's assistance, the book portrays how ADB is changing for better the lives of many in Asia and the Pacific region.

A World Trade Organization for the 21st Century: The Asian Perspective

This Asian Development Bank Institute book examines key changes in the world trading system and explores policy implications for Asia. Through a compilation of essays from prominent international and Asian trade experts, this book presents interaction of market forces and trade regulation. Lessons from the Asian experience offer new approaches and economic policies to sustain growth, presenting the World Trade Organization as a forum to improve regional and global trade governance in the 21st century.

Statistical Yearbook for Asia and the Pacific 2014

The Statistical Yearbook contains comparative statistics and facts about the 58 regional members and associate members of the Economic and Social Commission for Asia and the Pacific. It includes brief analyses of 32 key development features such as energy supply and use, international trade, and transport, among others. In energy, the region’s production structure is highly resource-intensive, although per capita energy use is low. The section on international trade recommends focusing on raising domestic value-added rather than increasing gross exports in Asia and the Pacific. Finally, investment in environmentally sustainable transport is encouraged.

Source: United Nations Economic and Social Commission for Asia and the Pacific 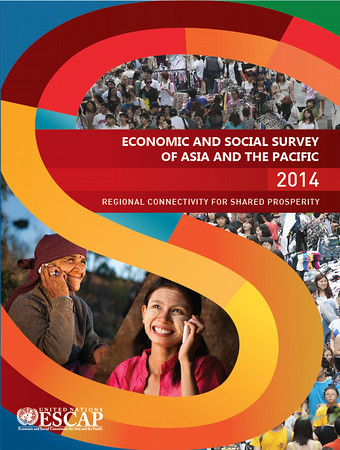 Economic and Social Survey of Asia and the Pacific 2014

This 2014 edition of UNESCAP's flagship publication emphasizes the importance of furthering regional connectivity in Asia-Pacific—a region which, despite significant reductions in poverty levels, is now witnessing rising income inequality, both within and between countries. It calls for driving the region's growth by exploiting the interdependence and synergies of five elements: trade and transport connectivity, ICT networks, energy connectivity, people-to-people networks, and promotion of knowledge-based economies, and advocates approaching connectivity as a regional public good.

Assessing the Costs of Climate Change and Adaptation in South Asia

This book discusses the economic costs and benefits of unilateral and regional actors on climate change adaptation in Bangladesh, Bhutan, India, the Maldives, Nepal, and Sri Lanka. It provides the total economic loss throughout the 21st century and estimates the funding required for adaptation measures to avert potential losses. Huge impacts are likely on vulnerable sectors in the region, with South Asia losing on average nearly 2% of its gross domestic product by 2050. Results of the study will aid climate change adaptation in the region, including initiatives for regional cooperation.

Constructed under the ADB-financed Green Power Development Project, Bhutan's Dagachhu hydropower plant showcases how a public–private partnership for hydropower development successfully promotes cross-border energy trade, contributes to increased national energy security, and improves access to on- and off-grid energy for 9,000 rural households and public facilities. This report reviews the project's key features and discusses how an investment in renewable energy infrastructure is leading Bhutan and its neighboring countries toward greater inclusive growth.

The World Economic Forum's Global Competitiveness Report offers a platform for dialogue among key stakeholders in government, business, and civil society on improving the living standards of the world’s citizens through insights on institutions, policies, and factors that drive or hinder growth and national competitiveness. Using the Global Competitiveness Index (GCI), twelve pillars are considered, including infrastructure, which, among factor-driven economies of Bangladesh, India, and Nepal, impacts the location of economic activity, reduces distance between regions, and enables production and faster flow of goods. Market size—essential for countries with small domestic markets—is another key index measured. The 2013-2014 report also includes an assessment of newly-covered Bhutan, and an analysis for the drop in India's GCI ranking.

The Asian Development Outlook, ADB’s flagship economic publication provides comprehensive macroeconomic analysis in Asia including growth projections by country and region. The Asian Development Outlook 2014 forecasts that developing Asia will grow 6.2% in 2014 and 6.4% in 2015. South Asia remains one of the slowest growing subregions—although growth is forecast to improve by 5.3% in 2014 and 5.8% in 2015.

The South Asia Regional Energy Study was completed as an important component of the regional technical assistance project Preparing the Energy Sector Dialogue and South Asian Association for Regional Cooperation Energy Center Capacity Development. It involved examining regional energy trade opportunities among all the member states of the South Asian Association for Regional Cooperation. The study provides interventions to improve regional energy cooperation in different timescales, including specific infrastructure projects which can be implemented during these periods.

Infrastructure for a Seamless Asia

The study reviews regional infrastructure being enhanced through regional cooperation in Asia and examines major issues and challenges. It suggests a framework for pan-Asian infrastructure cooperation, anchored on a long-term vision of creating a seamless Asia that will not only enhance the region's competitiveness and extend its global reach, but also help reduce poverty and promote greater environmental sustainability.